The Latest Features at the Arader Galleries 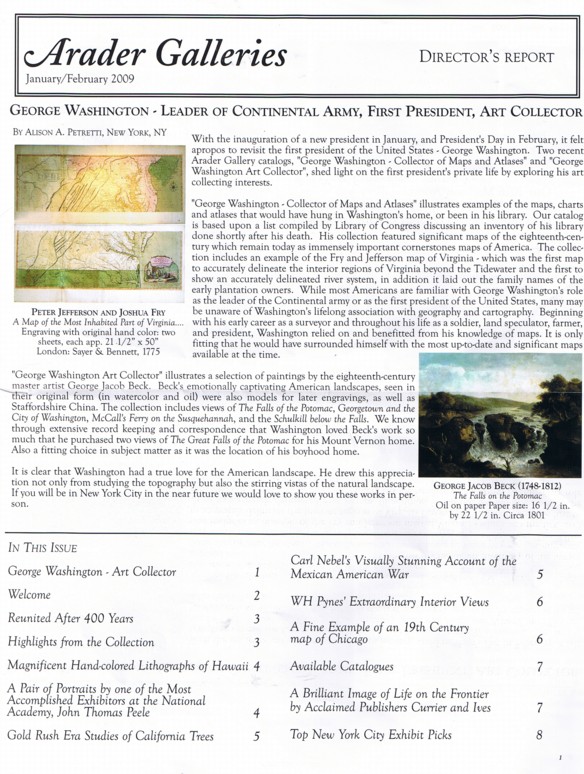 A recent Director's Report from the Arader Galleries.

We recently received a copy of the Arader Galleries' bimonthly Director's Report. We are slightly behind schedule, as this is the January/February 2009 issue, but the material has not lost any luster with the changing months. The Galleries have six locations in five cities, coast-to-coast across the U.S.A., for those planning a visit. These are a few of the items they featured in this latest report, though there is much more to be found in their specialties of books, maps, art, and related material at the galleries.

They are featuring a pair of magnificent atlases with a notable history in New York. Sir Thomas Egerton was a barrister in Elizabethan England. After an impressive pleading in a case against the Crown, the Queen appointed him Queen's Counsel, one of various legal and judicial positions he would hold for most of his life. Egerton was also appointed to the House of Lords. Egerton continued to serve into the reign of James I, and was named the First Viscount of Brackley in 1616, a late-in-life honor. He died the following year. As a respected nobleman, Egerton would have been a man of means, and included in his library were these two atlases. One is Saxton's Atlas of England and Wales, the other Ortelius' Theatrum Orbis Terrarum. As Arader notes, these two atlases from Egerton's library have finally been reunited after 400 years.

The Houston Gallery features Carl Nebel's hand-colored lithographs prepared for the 1851 publication, The War between the United States and Mexico, Illustrated, edited by George Wilkins Kendall. Kendall, a war correspondent for the New Orleans Picayune, witnessed some of the battles, and visited other battlegrounds shortly thereafter. There are a dozen scenes from the war, eleven of which took place in what is now Mexico, and one, the Battle of Palo Alto, which took place just north of Brownsville, Texas, on present-day American soil.

In San Francisco, the gallery features several drawings of pine and sequoia trees by artist Frederick Catherwood. Catherwood was an Englishman and architect by trade, whose interest in art and exploration took him on many remarkable journeys. In 1824, he was expedition artist on an exploration up the Nile. The late 1830s and early 1840s found him traveling through the jungles of Central America, visiting Mayan ruins. In 1850, he went to California at the height of the Gold Rush. He provided engineering work on the first railway in the state. During this period, he created these striking illustrations. Catherwood left California in 1853, and tragically died in an accident at sea the following year.

The Denver Gallery displays a map of Chicago from the period shortly after the great fire. It was published by Rufus Blanchard, who produced street guides for the area for almost half a century. This is a large, hand-colored lithograph map of the streets of Chicago and nearby areas.