A Trip to the Fair with the Kelmscott Bookshop 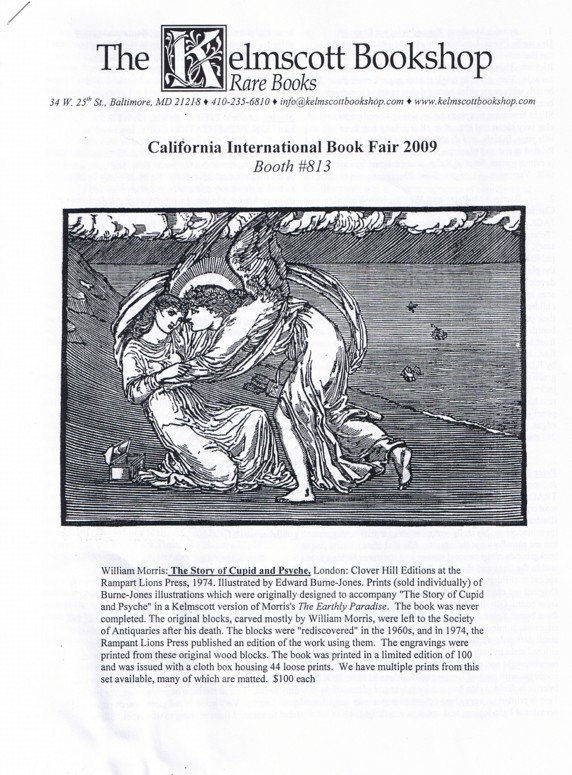 The Kelmscott Bookshop at the California Fair.

The Kelmscott Bookshop Rare Books produced a catalogue for the California International Book Fair 2009. The Kelmscott Bookshop focuses on fine press and other artistic works and early editions. Naturally, you can expect to find something from William Morris and his Kelmscott Press. The bookshop brought an interesting selection from their inventory along to the fair, and here are some samples of these books.

Item 25 is a copy of the 1929 first edition of The Autobiography of Lord Alfred Douglas, by...no need to say. This book contains a printed dedication to William Sorley Brown, plus a handwritten inscription to "W. Sorley Brown from his friend Alfred Douglas." It's not surprising that Douglas would like Brown, as the latter had written The Genius of Alfred Douglas in 1913. Brown was a journalist and one of the few who appreciated the poetical genius of Douglas. Most people knew Douglas better for his scandalous affair with Oscar Wilde. It was as a result of a libel suit by Wilde against Douglas' father that Wilde ended up being convicted of sodomy and spent two years in jail. Douglas' father, the Marquis of Queensberry, noted for his rules of boxing, despised Wilde and his own son as well. These were all a bunch of dysfunctional people, and their story is more entertaining than Douglas' poetry. Priced at $4,500.

Max Beerbohm has been cleverly described by Joseph Epstein as "the world's greatest minor writer." He is no longer a household name - not that he ever was - though his name is one of those we know we have heard of before. He wrote humorous essays and drew caricatures, and his largest following, perhaps, was among the literati. George Bernard Shaw was a particular fan of his work. Item 6 is The Works of Max Beerbohm, a first English edition of his first book. It is a collection of his essays, previously seen in periodicals, that was published in 1896. It includes a 16-page bibliography of his work, which is remarkable since Beerbohm was only 24 at the time. Offered is a presentation copy of Beerbohm's book to his godmother. $1,250.

Annie Brassey was a popular author in the days before Beerbohm appeared on stage. She wrote escapist literature, quite literally. Lady Brassey was married to a wealthy, influential man, which afforded her the opportunity to travel. She and her family (five children) would take off in the family yacht, the "Sunbeam," and sail around the world. She wrote several accounts of her trips. Item 13 is one of these adventures, though this is a sad one. The title is The Last Voyage to India and Australia, in the 'Sunbeam' 1886-1887. This was a voyage of some 50 people, including family, friends, and staff. Sadly, Annie came down with malaria off the coast of Australia and died at sea. So was she buried, as bringing her body home was not practical at that time. It was left to Lord Brassey to provide the book's conclusion. $525.

Item 79 is the very scarce first book by Booker T. Washington. The title is Daily Resolves, published in 1896, and contains affirmations on living positively. Washington was the notable black educator, born into slavery, who believed education was the means by which African-Americans could raise their position in society. $3,000.