Slavery from the William Reese Company 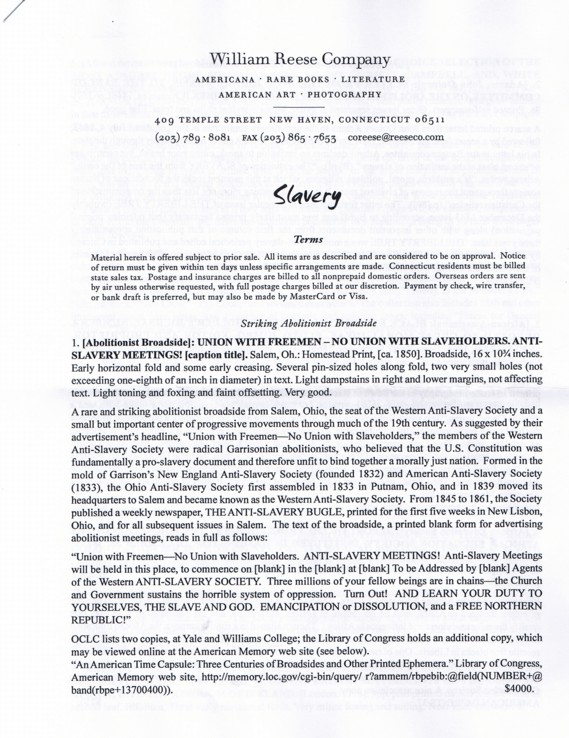 Slavery from the William Reese Company.

The William Reese Company has issued a list on a most unhappy, but historically important topic: Slavery. Americans tend to think of slavery as a peculiarly American problem, but that was hardly so. It continued to be an issue in America longer than other parts of the western world, but much of the material Reese is offering pertains to slavery and its aftermath in the Caribbean. This was very much a British problem, though the British, who created the problem for America, did have the sense to remove it much sooner. Here are a few of the items related to slavery Reese is offering.

There weren't any U.S. presidents opposing slavery, at least not until Lincoln, though two former presidents did become active in the movement. One was Martin Van Buren, the other John Quincy Adams. Item 2 is a printed 1843 letter from Adams, in which he wrote, "The extinction of SLAVERY from the face of the earth is a problem moral, political, religious, which at this moment rocks the foundations of human society throughout the regions of civilized man." This copy of the letter was printed in Chicago circa 1846. Priced at $1,750.

If Adams was ahead of his time, Col. Curtis Jacobs was behind it. Item 25 is the Speech of Col. Curtis M. Jacobs, on the Free Colored Population of Maryland, Delivered in the House of Delegates. Delivered in 1860, Jacobs argues that the solution to Maryland's "free negro problem" is the enslavement of the entire black population of the state. Evidently, this would solve the issue of determining who was slave and who free. Jacobs, of course, was motivated only by goodwill toward Maryland's black population. "My religion, my humanity, partakes of a higher order of friendship for the negro..." he explains. For, "...to emancipate them is equivalent to their extermination." With friends like these... Item 25. $375.

Perhaps nothing is more demonstrative of the evil of slavery than the slave sale, where families were permanently torn apart. Item 36 is a broadside announcing an auction north of Versailles, Kentucky, in 1827. The sale was settling the estate of one John Coleman, and among the items on the block were all of Coleman's slaves, "consisting of about 20 valuable slaves, men, women, and children," along with his furniture, farming utensils, a cart and ox, and "all the stock of horses, cattle, sheep and hogs..." The broadside was printed by Albert Gallatin Hodges, one of Kentucky's early and notable printers, later a strong Union supporter and friend of Lincoln. $4,000.

Those who purchased slaves at the Coleman sale undoubtedly got their money's worth of free labor, but those who made such a purchase at the estate sale of Brian Greer were taking a much greater chance. This sale took place in Calhoun, Georgia, and Greer's land, slaves, and slave cabins were all up for sale. What made a purchase risky was the date: December 2, 1862. Lincoln had already proclaimed the freeing of the slaves, which would take place one month from this date. A buyer would have had to have great confidence in a Confederate victory to purchase slaves at this juncture. Item 38. $4,750.

Item 31 is a Special Number of 'The Popular Magazine of Anthropology." The Negro and Jamaica... This was a speech delivered before the Anthropological Society of London on February 1, 1866, given by Commander Bedford Pim. Slavery was long abolished in all British colonies by this time, but black Jamaicans were hardly treated as equals. They attempted to rebel, but were brutally put down. This action horrified many in Britain. In his speech, Commander Pim employs a pseudo-scientific argument to demonstrate the racial inferiority of blacks, and the consequent need to keep them in their present condition. $300.

You may reach the William Reese Company at 203-789-8081 or coreese@reeseco.com. Their website is www.reeseco.com.