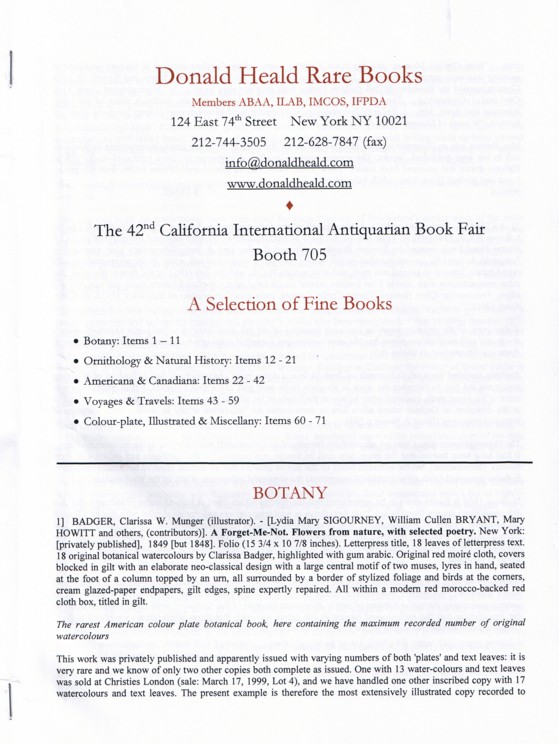 Some fine books for a fine fair.

Donald Heald Rare Books printed a catalogue especially for the recent book fair in San Francisco. The collection is divided into sections on botany, ornithology and natural history, Americana and Canadiana, voyages and travels, and color-plate books. Offered is something of a who's who of books, as it is filled with names like Audubon, Cook, Jefferson, McKenney and Hall, Lewis and Clark. The catalogue's title is A Selection of Fine Books, and that it certainly is. Here are a few of them.

Item 12 is perhaps the most famous of all American illustrated books, John James Audubon's The Birds of America. Offered is a first octavo edition, published from 1840-1844. Audubon originally published his work as a double elephant folio, an item so expensive few could afford it then, let alone now. He decided to republish it in a smaller, more affordable size, so that those besides the ultra-wealthy could obtain a copy. His plan worked, as the octavo edition became a popular book and finally enabled the talented artist to actually make a few dollars. A first octavo edition of Audubon's Birds is no longer, as Audubon stated, priced so "...as to enable every student or lover of nature to place it in his Library," but at least it is still available. This copy belonged to one of the original subscribers, W.S. Lincoln of Boston. We have not been able to definitively identify this individual, but his Boston residence makes us think he could have been a distant relative to that other man with the surname "Lincoln." Priced at $115,000.

And the first shall be last... Item 13 is a copy of the final octavo edition of Audubon's Birds of America. Heald notes that this last octavo edition is actually the most difficult to obtain. It was published in 1871, and shortly after its printing, the plates were destroyed when they fell through the floor of a Philadelphia building. $30,000.

Item 36 is a copy of America's most important exploring expedition: Travels to the Source of the Missouri River and Across the American Continent to the Pacific Ocean. The book is usually simply referred to by the authors' names, Lewis and Clark. These two were appointed to head up an expedition into the newly acquired territory of the Louisiana Purchase by President Jefferson. At the time, the American Northwest was one of the least known wilderness areas remaining on the globe. The expedition ran from 1804 to 1806, but this official account was not published until 1814. Offered is a first British edition, published the same year as the first American. $32,500.

The Lewis and Clark trip was clearly America's most important expedition. Here's a good candidate for number two: An Account of Expeditions to the Sources of the Mississippi, and through the western parts of Louisiana...during the years 1805, 1806 and 1807. This is Zebulon Pike's account of his journey. His first exploration was an unsuccessful attempt to find the headwaters of the Mississippi. The second trip sent him to the head of the Arkansas and Red Rivers, and this was an area still unexplored by Americans and virtually unknown. Today, it is the American Southwest, but at the time, Mexico extended much farther north than it does today. The result was that Pike and his men found themselves on the wrong side of the border, and were held for a while by Mexico. This enabled Pike to learn more about the territories of today's Texas and New Mexico. Item 40 is an 1810 first edition of Pike's account. $35,000.

Item 2 is A Monograph of the Odontoglossum. My immediate reaction was that this was about some dinosaur specie, but odontoglossum is a variety of orchid. They are unusual in that they thrive in cooler, drier climates, and at higher altitudes than we expect from orchids. It took a while for growers in author James Bateman's England to recognize that this was the reason they had so much trouble growing these flowers in hothouses. The highlight of this work is the 30 hand-colored lithograph plates by Walter Hood Fitch, "the most outstanding botanical artist of his day." Published 1867-1874. $22,500.

We cannot tell you much about this book, but it has a great title: Airy Nothings; or Scraps and Naughts, and Odd-cum-Shorts; in a Circumbendibus Hop, Step, and Jump, by Olio-Rigamaroll. Actually, it was by Michael Egerton. This is a collection of 23 hand-colored plates of Scotland, Wales and Ireland, by the humorous artist Egerton. Item 51 is an 1825 second edition. Heald notes that some of the verse is "strangely reminiscent" of Lewis Carroll, though Carroll came along fifty years later. For those lexicographally challenged souls such as I who already struggled with "odontoglossum," a "circumbendibus" is an indirect route. $3,500.