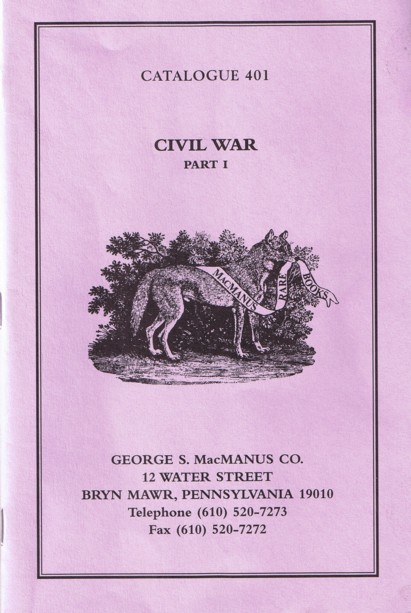 The George S. MacManus Company has issued a new catalogue on America's terrible internecine conflict: Civil War, Part I. MacManus purchased much of the inventory of Chapel Hill Rare Books in 2007, and has since been completing the arduous task of combining it with their own. That process now finished, MacManus is starting anew from the beginning of the alphabet to present items from the combined inventories. Part I takes them from A to Hergesheimer. That's Joseph Hergesheimer, who published a book about General Philip Sheridan of the Union side. Here are a few of the remaining 558 books concerning the Civil War that MacManus is offering.

Item 456 preceded the outbreak of war, but not by much. It is the Journal of the Public and Secret Proceedings of the Convention of the People of Georgia, Held in Milledgeville and Savannah in 1861. In December of 1860, South Carolina seceded, but its efforts would have been meaningless without support from its southern neighbors. South Carolina had attempted this 30 years earlier over tariff issues, but failed when no other states would join. This time was different. This journal reports on the Georgia secessionist convention, where that state decided to join South Carolina at the exits. It includes the first printing of the Georgia Ordinance of Secession in book form, the first or second printing of the Confederate Georgia constitution, and an early printing of the Confederate constitution. This copy was owned and is signed by Henry Dickerson McDaniel. The 24-year-old McDaniel was the youngest participant in the Georgia secession convention, and was initially opposed to seceding, though he later went along with the move and rose to the rank of major in the Confederate army. He served as Governor of Georgia in the 1880s (replacing Alexander Stephens, who had been Vice-President of the Confederate States, on his death). Priced at $1,750.

Item 131 is a dramatic 1865 broadside commemorating triumph and tragedy. It celebrates the Emancipation Proclamation, freeing the slaves, but mourns the loss of President Lincoln to an assassin's bullet. Along with a portrait of Lincoln, it features vignettes of slaves at work and being auctioned, and a family apparently hearing the terrible news of Lincoln's assassination. $3,000.

The physical war between the Union and the Confederacy ended in 1865, but the resulting legal war between the United States and Great Britain continued until 1871. Item 7 is The Case of the United States, to be Laid Before the Tribunal of Arbitration, to be Convened at Geneva... an 1872 first edition of arguments leading to the 1871 Treaty of Washington. This printing includes various documents concerning the so-called "Alabama claims" by the U.S. against England. During the war, the Confederacy had ordered several ships, to be built in Britain. The most notable was the CSS Alabama. After the war, the United States argued that Britain had violated its neutrality and, in so doing, harmed the U.S. A panel consisting of representatives of nonaligned Switzerland, Italy, and Brazil, along with the U.K. and U.S., met in Geneva, and awarded the U.S. $15.5 million in damages. $65.

Item 60 is one of the earliest, and most important bibliographies of the Civil War. It is a first edition of the 1866 bibliography The Literature of the Rebellion. Author John Russell Bartlett is better known for his 1848 Dictionary of Americanisms, along with other works, and was a participant in the original boundary commission after the Mexican War. This bibliography was printed in a limited edition of just 250 copies. $450.

Item 248 is a look at the last days of the Civil War by the last surviving member of Lee's staff. The title is Just Before and After Lee Surrendered to Grant, by Major Giles B. Cooke, published in 1922. Cooke was with Lee during these final days of the war. He finally got around to publishing his book in 1922, 57 years after the incidents described, though he had no need to hurry. He lived until 1937, passing on at age 98. Cooke spent most of his post-war years as a minister, not a warrior. $500.