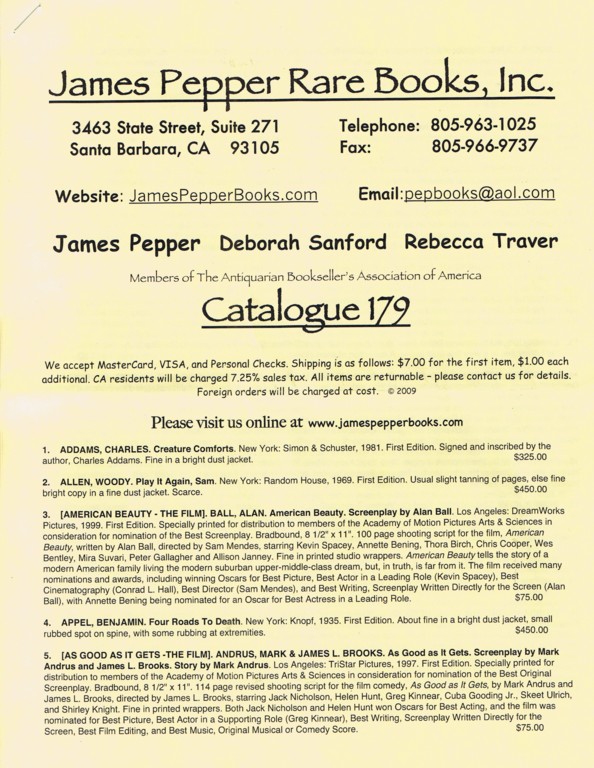 James Pepper Rare Books has issued their Catalogue 179, a new collection of works mostly in the fields of literature and film, with many first editions. There are also a few pieces related to history, politics and the military thrown in for variety. As usual, most items are from the 20th century, though a few will take you back or forward from those one hundred years. Here are a few of the items we found in this latest Pepper catalogue.

Item 17 is an unusual copy of Admiral Richard Byrd's book Skyward. Byrd was the naval aviator and explorer credited with pilot Floyd Bennett as being the first to fly over the North Pole. The rapid speed of their round trip along with the plane's oil leak has led some to question his claim, but he is still generally given the credit. Byrd went on to lead several Antarctic expeditions, but this book reports on the northern flight. This is a copy of a deluxe, numbered edition of 500 copies signed by Byrd, and includes two small strips of fabric taken from his plane, the Josephine Ford. Priced at $450.

Item 35 is The Standard Casting Directory, published in Hollywood, from December 1925. This copy was owned by actor/agent/producer Freddie Fralick (also known as Freddie Fraelick, Alan Fralick, Allan Fraulick, and various other iterations, none well remembered). This directory will introduce you to some of the greatest actors of the day, including William Powell, Lionel Barrymore, Mary Astor, William S. Hart, Tyrone Power, and Fay Wray. It also covers a few less remembered four-legged actors, such as "Pal the Wonder Dog," "Cameo the Almost Human Dog," and "Jiggs the Dog that Talks." $300.

Speaking of amazing animals, item 125 is Animal Heroes. Being the Histories of a Cat, a Dog, a Pigeon, a Lynx, Two Wolves & a Reindeer and in Elucidation of the Same Over 200 Drawings. This is a 1905 book by Ernest Thompson Seton, and contains stories and illustrations of animals performing heroic acts. This has to be the perfect book for those who love animals. $500.

Stephen Vincent Benet was one of America's most recognized writers of the 20th century, noted for novels, poems, and short stories. He is best known for John Brown's Body and The Devil and Daniel Webster. However, those came later. In 1915, he published his first book, Five Men and Pompey, and a first edition of that first work is offered as item 8. $475.

Item 56 is a 1921 "Special Deluxe Tenth Anniversary Edition" of Zane Gray's most famous book, Riders of the Purple Sage. Harpers published this tribute edition to Gray as he was their most popular author at the time. This copy includes an inscription from Gray "To Mildred, with recollections of the Purple Sage Uplands, and the wall of Surprise Valley." "Mildred" was Mildred Smith, one of and perhaps Gray's favorite assistant/lover. Affixed to the front pastedown is a photograph of Smith on horseback in Monument Valley. A saddled, riderless horse next to her may indicate that Gray snapped this photograph when the two were on an outing. $4,000.

Here are two items we will present together in the interest of fairness. They are priced at $9,500 each. Item 55 is a carte-de-viste photograph of General Ulysses S. Grant, circa 1865. The General is seen standing, one hand in a pocket, the other grasping the edge of his coat. The photo has been signed by Grant. Item 75 is a letter, dated October 19, 1854, from Robert E. Lee. At the time he was the Superintendent at West Point, a loyal member of the U.S. Army. In this letter, Lee seeks a lithographer, perhaps not a typical military position, but important as someone was needed to create maps, manuals, and such.