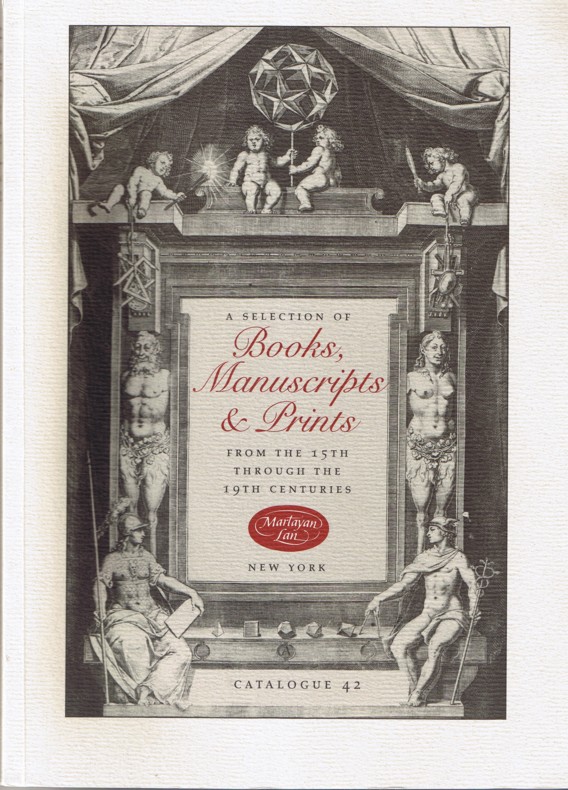 Martayan Lan has published a remarkable catalogue of Books, Manuscripts and Prints, from the 15th through the 19th Centuries. This is a half-inch thick compendium of significant works from the dawn of printing to the dawn of the Industrial Revolution. We mention size, not because it inherently matters, but because each such large catalogue we have received has been notable not for its quantity of listings, but its quality and presentation. This one is no exception. Offered are 182 fine works, thoroughly described and illustrated. This is an outstanding collection of items rare and definitely antiquarian. These are a few.

Item 5 is a manuscript from Queen Elizabeth I's Privy Council, her most intimate advisers. The date was 1599, and England was in one of its various states of war with Spain. The document authorizes payment to a ship out of Plymouth sent to Spain on a spy mission. The amount granted was 200 pounds, a very considerable sum, and at first the Council was reluctant. However, payment was authorized as the mission intercepted "certaine letrs of the enemyes, wch served to good purpose for discovery of their intentions." Actually, this was a rather gentle mission, for as Martayan Lan points out, most of these visits by the British were intended to intercept Spanish shipping, a polite word for "piracy." In those cases, payment was unnecessary, as the arrangement was that the Crown, crew, and investors got to split the booty three ways. Priced at $12,500.

Item 14 is a first edition of one of the most important works of incunabula, Liber cronicarum cum figures et ymaginibus, a 1493 work better known as the Nuremberg Chronicle. Author and physician Hartmann Schedel created the first illustrated encyclopedia, and it is a masterpiece hard to imagine as printing was not yet 40 years old at the time. It is a history of the world, from Adam and Eve to what was then the present, plus the future, right to the end of times. It contains 1,809 woodcut illustrations including both historical personalities and places. These images provided many people with their first look at cities and places they could never hope to visit. $165,000.

It is probably just about the most familiar philosophical quotation around: "I think, therefore, I am." Item 82 is A Discourse of a Method for the well-guiding of Reason, and the Discovery of Truth in Sciences, by the quotable Rene Descartes. Of course, there are many more words of wisdom in this work, but let it be noted that this is a copy of the first English edition of 1649, meaning this was the first appearance of those words in the English language. $90,000.

Item 146 provides a very early Western look at Japan and the Philippines, and one focused on issues other than converting the natives. Francesco Carletti was a Florence merchant who circumnavigated the globe between 1594 and 1602, but spent much of that time in Asia. Most early reports from Japan came from missionaries, who were more interested in religious topics, while Carletti focused on matters of trade, along with topics such as food, construction, language, prostitution, and other such non-religious matters. On returning to Florence, Carletti presented his manuscript to Ferdinando de Medici, the Grand Duke of Tuscany, but for whatever reason, it was not published until a century later. The book is Ragionamenti...sopra le cose da lui verdute ne suoi viaggi so dell'Indie Occidentali... published in 1701. $13,500.