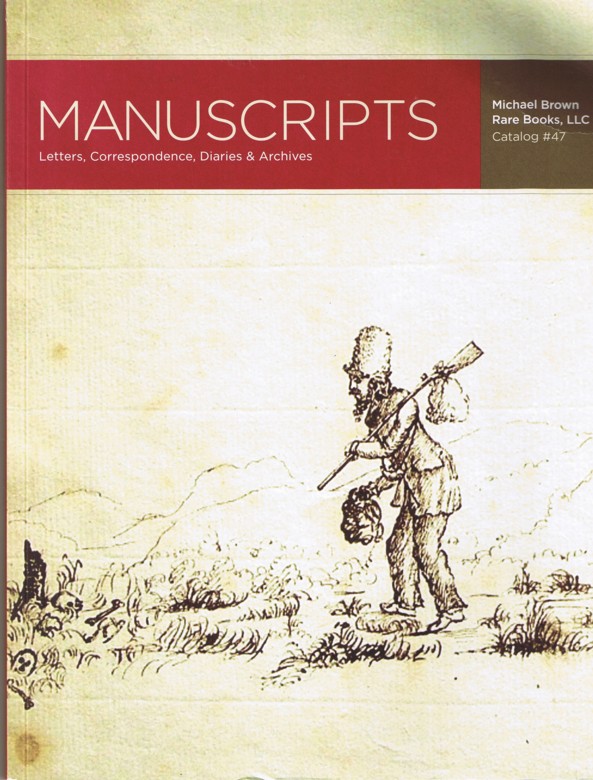 A drawing, likely of

Michael Brown Rare Books has published one of the most thoroughly described catalogues we have seen: Manuscripts. Letters, Correspondence, Diaries and Archives. These are, naturally, one-of-a-kind items, and Brown has chosen to print extensive selections from those being offered. This catalogue employs 148 large pages of small type to cover 83 items. The result is a detailed look not only at the particular items, but of the time and places described in these hand-written documents. You will come away with a greater understanding of and appreciation for what life was like in early America, the source of most of these documents.

There are three items of particular historic significance being offered. We will describe these first, while recognizing that they are only within the means of institutional or very high-end collectors. However, the remainder of the documents are mostly within the range of more typical collectors, and while they may not be of quite such historical weight, they nonetheless offer a fascinating look at life in a very different America from the one we know today. We will also take a sampling of these other manuscripts, with a recommendation you contact Michael Brown to learn about the rest.

Item 40 is an extensive diary from New York's "Burned-over District" from Methodist circuit rider Rev. Benajah Williams. It contains around 4,600 pages from 1817-1862, the later years spent at Chagrin Falls, Ohio. Much of this comes from the period of the Second Great Awakening in upstate New York, when religious fervor in what was still something of a frontier led to new religious and social practices. It was a period of growth for the Shakers and Millerites, the latter of whom disappeared when their date for the Second Coming of Christ came and went. It was also a time of growth for the abolitionist, temperance and feminist movements. Perhaps of greatest note, Williams served in Mendon, then home of Brigham Young, and just west of Palmyra, the hometown of Latter Day Saints' (Mormon) founder Joseph Smith. His diary sheds important light on what is known as Joseph Smith's "First Vision." Smith reported that he received his first vision of God, which is generally considered to be the beginning of the Mormon religion, in an orchard after a revival meeting in 1820. However, skeptics have claimed there was no such meeting near Palmyra in 1820, the only ones having taken place in 1817 and not again until 1824. They have claimed this throws suspicion on the accuracy if not the honesty of Smith's claims. However, Williams' manuscript diary describes a two-day Methodist revival meeting at Richmond, 30 miles from Palmyra, and 19 miles from the Coates farm where then 14-year-old Smith was working. Allen Coates, who hired Smith, was a devout Methodist, and Coates' grandson later said that his grandfather had taken young Smith to a Methodist revival, and after that, Smith had gone off to an orchard and had a vision. This is consistent with Smith's version. Williams' diary appears to support one of the fundamental but controversial claims by Joseph Smith pertaining to the beginnings of the Mormon Church. Priced at $300,000.