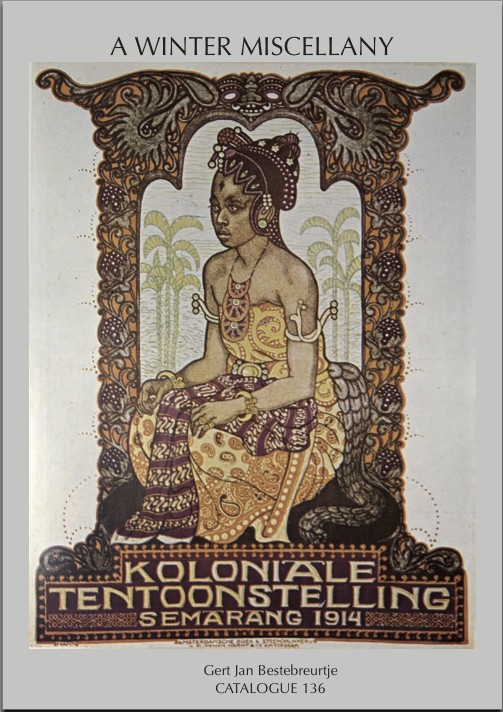 Gert Jan Bestebreurtje Rare Books has released Catalogue 136 A Winter Miscellany. While Bestebreurtje is located in the Netherlands, and there are certainly many Dutch works available, they also have a surprisingly large number of books of interest to collectors of Americana. There are some American books, plus many items of European Americana. So wherever your interests lie, this catalogue may have something you would like. Here are a few samples.

Now here is just about the last book you would expect to find in Holland: The wonder book of freaks and animals in the Barnum & Bailey greatest show on earth. This is an 1898 London book, but the subject is very American. P.T. Barnum had made his name in the "freak" business, with various unusual appearing people, with strange tales Barnum often invented to explain their oddities. He toured America with his "Greatest Show on Earth" until 1881, when he merged his circus with that of James Bailey. It survives to this day, later further combined with the Ringling Brothers Circus, but with not so much emphasis on "freaks" anymore. Item 9. Priced at €95 (Euros, or about $136 in U.S. dollars).

Before Barnum became a showman, he was a liberal politician, and strong opponent of slavery. He undoubtedly would have approved of this Ezra Chase book published on the eve of the Civil War, in 1860: Teachings of patriots and statesmen; or the 'founders of the republic' on slavery. The founders managed to combine personal abhorrence for the institution with a tolerance for it based on perceived necessity. The result was that both sides of the slavery debate were able to argue that the nation's founders were on their side. Item 23. €160 (US $230).

There was an alternate point of view, even in the North, at this time. Item 107 is the Official Report of the Great Union Meeting Held at the Academy of Music, in the City of New York, December 19th, 1859. Once the war began, "union" became synonymous with those who opposed the South, slavery, and secession. Before the war, it was more a term used by those who supported the South. At that time, those who supported slavery blamed abolitionists for tearing the union apart with their demands to eliminate this practice in the southern states. At this 1859 meeting, various northerners railed against abolitionists, and John Brown in particular, as they tried to display that northerners were sympathetic to the South's right to permit slavery. These views were not sufficiently supported by the election of Abraham Lincoln the following year, so the South attempted to break the Union anyway. Item 107. €125 (US $180).

Here is a circa 1815 engraving of a settlement on the Kentucky frontier, which is headed, and described, in three languages: Dutch, French and English. The English title is Little Loretto Kentucky United States of America. Three Kentucky women, with assistance from Father Charles Nerinckx, the second priest in Kentucky, founded the Sisters of Loretto in 1812. Their settlement was named "Little Loretto" for a shrine in Italy. Father Nerinckx moved west a decade later, and the sisters moved on as well, though retaining a presence in Kentucky. They can now be found in St. Louis, El Paso, Denver, and serving people around the world, with both sisters who take vows and other affiliated people who form the Loretto community. €1,250 (US $1,801).

Item 17 is Travels to discover the source of the Nile, in the years 1768...1773, by James Bruce. Bruce conducted the most notable attempt to find the source of the Nile, at least until Speke's expedition a century later which actually found it. Bruce thought he had found the source, but he had reached the headwaters of its tributary, the Blue Nile. Most consider the source to be the head of the White Nile, at Lake Victoria. Nevertheless, Bruce's book remains one of the greatest accounts of African exploration. €4,950 (US $7,140).