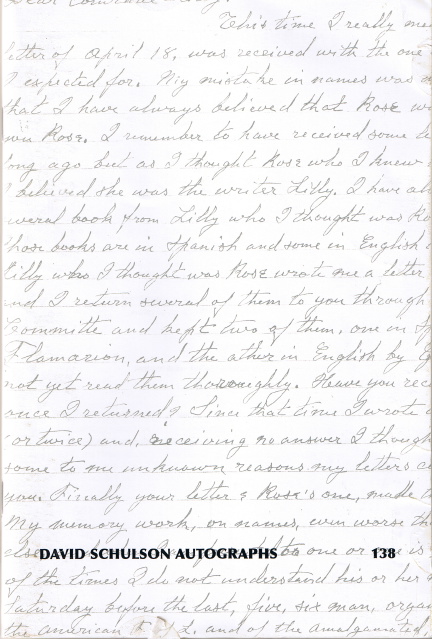 David Schulson Autographs recently published their catalogue number 138. It contains autographs, usually written on a larger document, from musicians, artists, writers, scientists, political figures, and more. Both Europe and America are well represented. Most are from the 19th or 20th century. These are overwhelming names you will recognize, and if you don't recognize the name, you will probably recognize the individual's accomplishments. Often, you will find personal letters that offer insight on the inner thoughts of these famous people. Here are a few of the autographs you will find in this latest Schulson catalogue.

Hector Berlioz was one of the great composers of the 19th century. He was both a composer and conductor, and his music made many people in his home country of France and all over the world very happy. It did not do the same for him, at least later in life. Despite great success, his later years were filled with tragedies - the passing of two wives, son, and other relatives, along with declining health. Berlioz was an admirer of the Italian opera composer Gaspare Spontini, whom he championed even as his work went out of favor. In 1863, he wrote (in French) to Spontini's widow, and as typical of the now older (60) and unhappy Berlioz, he thanked Mrs. Spontini for her interest in "my sorry health," and noted, "...in short life is barely tolerable in such circumstances." He continues with equal optimism to the topic of music: "As for musical matters the disgust I feel towards them leaves me resigned to expect the worst." He completes the letter by promising to visit her a few days hence, though one can wonder why would she have wanted to see him. Item 9. Priced at $3,450.

Item 88 is a bizarre document circa 1937 signed by Soviet leader Joseph Stalin. It is an unusual "official document" created by his daughter, Svetlana, then about 11 years old. Written in Cyrillic, "Setanka" (her nickname) "The Mistress" (his pet name for her) commands her father to sign her diary. She has created an official "seal" with an arrow where he is to sign. Stalin writes, "I submit Secretariat Stalin." The playful father persona seems strange considering Stalin had recently killed millions of his own people who got in the way of his attempts to industrialize and control the nation, along with conducting show trials and executions of many of his former political allies. Fifteen years after his death, Svetlana denounced her father's regime and found asylum in the United States. $8,500.

Item 56 is a letter from the French and American hero, the Marquis de Lafayette, to Adolphe Perier, the husband of his granddaughter. Lafayette was involved in the politics of his homeland for half a century after he left America, always fighting for liberty and a Republican form of government. He was a supporter of the Revolution of 1830, which brought the so-called "Citizen King," Louis Philippe to power. Lafayette was unsure that France was quite ready for the democracy of America, so he supported the idea of beneficent "citizen king" surrounded by republican institutions. However, Louis Philippe proved to be more despotic than Lafayette envisioned. By the end of 1833, the backsliding had begun, and Lafayette addressed the Chamber of Deputies reiterating his belief in liberty. Lafayette was a beloved figure in France, as he was in America, and the 12,000 copies of his speech Lafayette had printed quickly sold out. On January 6, 1834, Lafayette wrote to Perier, sending a copy of his speech, and noting, "This is all I have left of twelve thousand copies...that were sold in Paris in three hours time." Unfortunately, there was not much more Lafayette could do to preserve freedom in France. He died just four months later. $2,200.