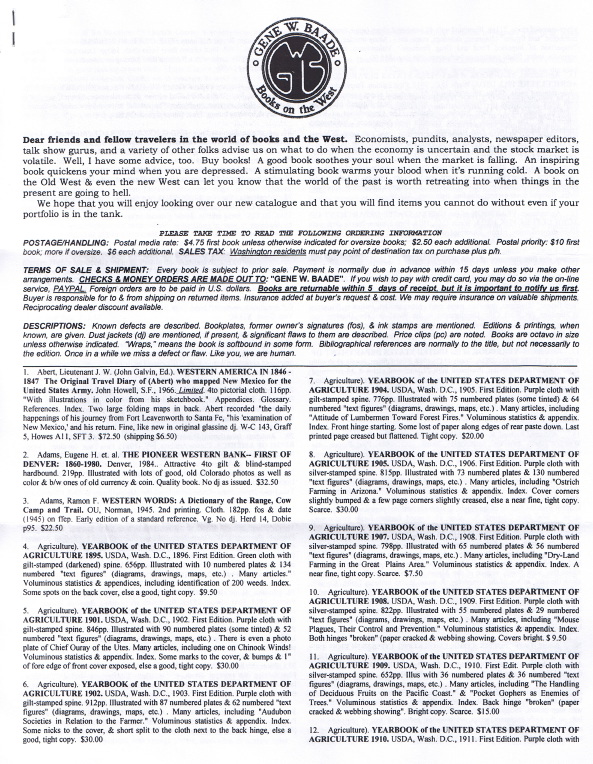 Books on the West Catalogue 1108 from Gene W. Baade.

Gene W. Baade Books on the West has issued their Catalogue 1108 of... you guessed it. Everyone will enjoy this catalogue since everyone loves the Old West. However, Baade gives us some additional reasons for buying books in these troubling times. "A Good book soothes your soul when the market is falling. An inspiring book quickens your mind when you are depressed. A stimulating book warms your blood when it's running cold." What's more, if you pick books that are rare and of significant interest, you can make money on them over the long haul, even as they bring pleasure an entry in your broker's report will never afford. So, you may want to consider his advice..."Buy books!" Here are a few to consider.

Item 96 is a book recently made timely by tragic events: Isaac's Storm: A Man, A Time, and the Deadliest Hurricane in History. This 1999 book recounts the Galveston hurricane of 1900. This terrible storm which flooded the entire island caused some 6,000 or more deaths, the worst such tragedy ever. As a result, Galveston built its seawall, which provided some, though not complete relief from the wrath of Hurricane Ike in September. Between the seawall and the advance warnings not available in 1900 that enabled people to flee before the storm, the fatalities were nothing like thousands this time. Eric Larson's book is written from the point of view of Isaac Monroe Cline, who was sent to Houston to open a new section of the U.S. Weather Bureau at the turn of the last century. The copy is signed by Larson. Priced at $30.

Item 129 is one Baade says is "not exactly a western book," and yet the inventor memorialized was critical to the opening of the west in the days before the railroads. This is The Life of Robert Fulton, by J. Franklin Reigert. Fulton, of course, was noted for developing the first commercially viable steamboat. While Fulton plied his invention along the Hudson River in the early 19th century, it would soon become a fixture along other rivers, including the Mississippi. This biography is not quite contemporary, but its date of 1856 places it much closer to Fulton's lifetime than we are today. $125.

Banks are certainly in the news these days. Here is the story of what was once the biggest bank in the Rocky Mountain West, a leader in the development of the area. Item 2 is The Pioneer Western Bank - First of Denver: 1860-1980. It helped finance the railroads, mining, and oil and gas development (the latter helping lead to its downfall). It was once robbed by Butch Cassidy. Its first woman director was Audrey Meadows, better known as Alice Kramden, wife of bus driver Ralph. Alas, banks get overextended, and Denver's pioneering bank was sold to First Interstate in 1980, which fifteen years later was taken over by Wells Fargo. Ironic, as Wells Fargo also was a pioneer that began operations around the same time. $32.50.

Thermopolis, Wyoming, is not one of the larger towns you will ever visit, but it does claim to have the world's largest collection of hot springs. I do not know whether this is true, but I can attest that what they do have is spectacular and worth a visit. It was even worth a visit back in 1910, when transportation to this out of the way location was much more difficult. Item 101 is a Pictorial Souvenir of Thermopolis Wyoming, privately published by A.G. Lucier in 1910. We would imagine that most of the town of Thermopolis has changed in the past century, but hot springs spring eternal. $300.