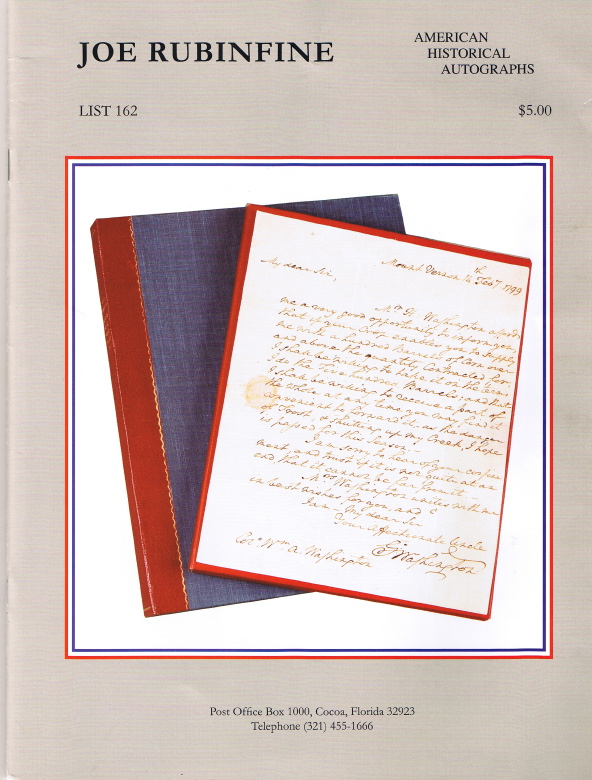 Joe Rubinfine has released his List 162 of American Historical Autographs. While all of these documents contain autographs, only a few are simply signatures. Most are various sorts of documents, from simple signed printed forms to complete letters, to even an extensive collection of handwritten papers. In here you will find many of the nation's presidents, along with military leaders, signers of the Declaration of Independence, western heroes, Confederate leaders, presidential wives, and others. There is even a John Hancock. Presidents range from the great, such as Washington and Lincoln, to the not-so great, including Fillmore and Pierce. These are some of the signed documents offered in the latest Rubinfine catalogue.

Item 28 is a telling letter from the aforementioned Pierce, a president not only unpopular in his day, but one whose reputation has not been rehabilitated by time either. He was one of those "northern men with southern principles," so much so that he would become a southern sympathizer in the Civil War, despised in the North. However, this letter goes back to October 6, 1855, and in it, Pierce strenuously defends the Kansas-Nebraska Act, also despised in the North. It was the act which repealed the Missouri Compromise, opening the West to slavery based on popular choice. Writes Pierce, "...it is my firm conviction that the principles of the Kansas & Nebraska Bill, constitute the only ground upon which the slavery question can be placed and the Union of these states preserved..." Pierce believed this compromise with the South was the way to preserve the Union, but the anger it stirred had the opposite effect, especially after proslavery "ruffians" in Kansas tried to rig the elections to favor their side. This letter to former Congressman and previously defeated Pierce supporter J.J. Taylor of Owego, New York, comes with an earlier Pierce letter from 1854 on the same issue. Priced at $22,500.

Here is the better president: item 29 is an 1861 letter from Abraham Lincoln concerning Venerando Pulizzi, Jr., once briefly a soldier, who wished to reenlist at the start of the Civil War. Pulizzi had joined the military in 1855, but got into an altercation in Charleston a short time later. Pulizzi attributed the problem to his being too respectful of Blacks in this southern port, the locals to his actions being violent. Whatever the cause, Pulizzi was not likely to find friendly witnesses in Charleston, and the then Secretary of War who brought charges against him was not likely to be sympathetic either. The Secretary of War was Jefferson Davis, later President of the Confederacy. Pulizzi wisely resigned his commission, rather than face those odds. Considering the changes in the ensuing six years, it is not surprising that Lincoln recommended that Pulizzi now be reinstated. However, the second time was no charm for Pulizzi, who again resigned his commission a few months after being reinstated. $23,000.

Item 45 is a collection of letters and other documents from Lucretia Garfield, widow of President James Garfield. Most are from the first few weeks after the President died in 1881, and the letters reveal just how immense the loss was for Mrs. Garfield. She would soldier on for her family, but the grief and loss would stay for the remainder of her life. Almost a decade later, she wrote, "...days nor years can dull the memory of 'the cruel blow' nor lessen the pain of loss." Then, reflecting the great philosophical uncertainty of existence, she adds, "If we knew that somewhere in the great universe he still lives and that in the great Eternity sometime we should meet again...then our eyes could turn to the future's hope with gladness and rejoicing..." $17,500.