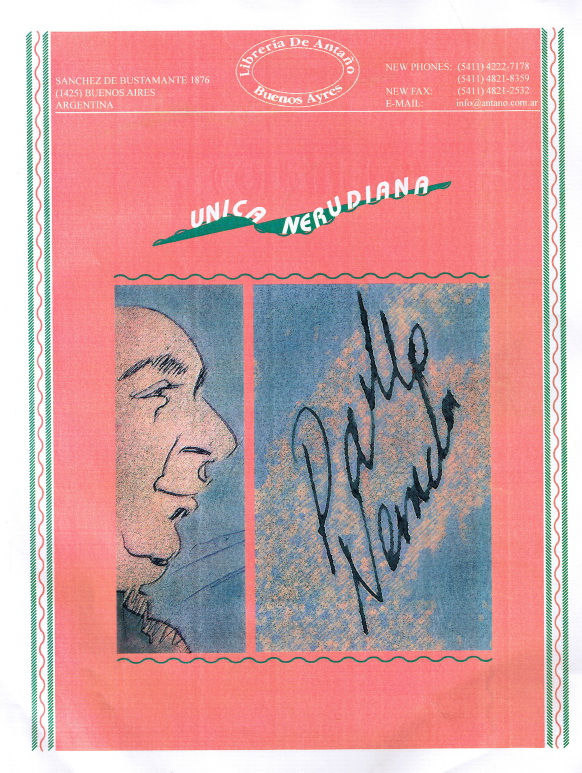 Libreria de Antano has published a catalogue of unique and special items pertaining to the Latin American poet Pablo Neruda. Neruda has frequently been cited as the greatest Latin American poet of the 20th century. Some call him the greatest poet of the century period. Born in 1904 in the Chilean town of Parral, Neruda published his first poem at the age of 13. By 16, he had adopted the name "Pablo Neruda" (it was not his birth name), and at 19 published his first book of poetry.

Through the 1920s and early 1930s, Neruda took on various minor diplomatic posts for Chile while continuing to write poetry. It was in this period he wrote Residencia en la Tierra, a collection of surrealist poems considered his literary breakthrough. However, the Spanish Civil War soon turned Neruda's focus to the political. He supported the Republican side in that conflict, and while they were unsuccessful, it had a lasting impact on the poet. His works became more political, and his focus turned more to the left.

By the end of the war, Neruda had joined the Communist Party and was elected to the state legislature. However, his political positions would force him into exile for several years. He returned home in 1952, and despite his break with his Stalinist past, remained a controversial figure for his Communist sympathies. With the election of a leftist government in 1970, Neruda returned to the diplomatic corps as Ambassador to France. The following year, he received his greatest honor, the Nobel Prize for Literature. Pablo Neruda died in 1973, just 12 days after a rightwing military coup overthrew the elected Chilean government, and his funeral became a rallying point for those opposed to the new dictatorship. For years after, his works were suppressed in Chile, but with the restoration of democracy, he has again become a highly respected literary figure in his homeland as well as throughout the world.

The Libreria de Anatono catalogue is entitled Unica Nerudiana. That title signifies that what has been gathered are unique Neruda items. Of the 34 items, 29 are one of a kind in that they are inscribed or signed by the poet. Others are works that are extremely difficult to obtain, while some are manuscripts. This is a collection appropriate for those who seek the rare and obscure items of "Nerudiana."

As a note of caution, the catalogue, like Neruda's original writings, are in Spanish. You will need facility with the language to follow the descriptions. For this reason, we will refrain from attempting to provide descriptions of individual items offered herein. However, those interested in Neruda in his native tongue should contact Libreria de Antano for a copy of this catalogue. They may be reached at (5411) 4822-7178 or info@antano.com.ar.