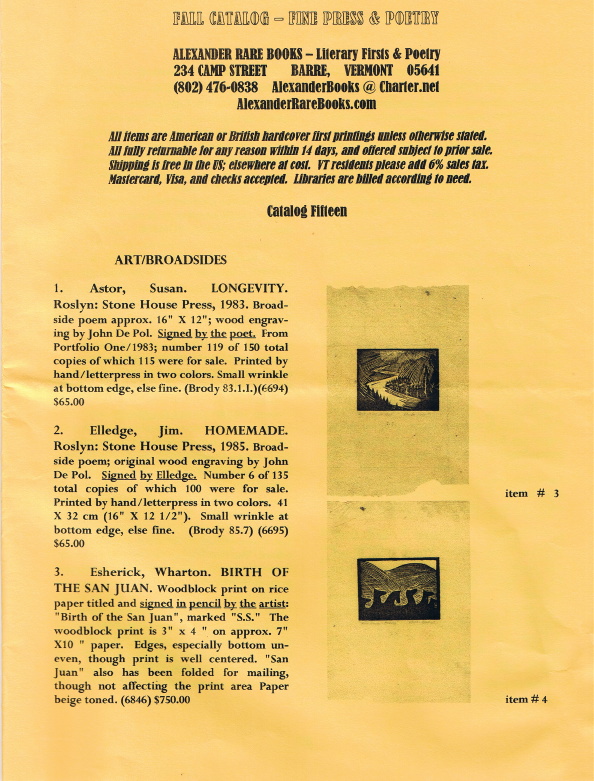 Alexander Rare Books has issued a new catalogue for the fall, aptly named Fall Catalog - Fine Press and Poetry. That title, brief as it is, describes what is offered very well. What we can add is this is primarily 20th century material, and most of it is quite scarce. The quantities originally printed often assured that these works would be scarce in the years ahead. However, rare does not always equal expensive, as most of these items are very reasonably priced. Here are a few.

Item 36 is a copy of Shakespeare's Venus and Adonis, as published in 1930 by the press of Harrison of Paris. This was the fine press started up in Paris by American expatriate Monroe Wheeler with Barbara Harrison. Offered is number 397 of 475 copies printed. Harrison of Paris works are uncommon, there being only 14 of them. The first 13 were published in Paris, with the final item being published after the firm moved to New York. Operations ceased in 1934. The following year, Wheeler joined the staff of the Museum of Modern Art, where he was in charge of publications and exhibitions for over 25 years. Priced at $100.

Walter Van Tilburg Clark is best known for his 1940 novel The Oxbow Incident. It is a western tale of misplaced frontier justice at the end of a rope. In 1943, it was translated to film starring Henry Fonda. It received an Academy Award nomination for Best Picture that year. Clark went on to write a couple more novels and numerous short stories. However, many years earlier, 1932 to be exact, Clark published his only book of poetry. That work, Ten Women in Gale's House, is offered as item 62. $150.

While many of the works in this catalogue are somewhat obscure, that is not the case with item 79. This is Mountain Interval, published in 1916, and written by Robert Frost. This collection contains some of Frost's best-known works, including The Road Not Taken. Offered is a copy of the uncorrected first state of this book (a total of 4,000 copies were printed including the corrected second state). Frost has inscribed the copy to Mary Cadwalader Jones. Jones was a close friend of Henry James, sister-in-law of writer Edith Wharton, and an author in her own right. $3,000.

Item 47 is a repulsive copy of a repulsive book. The Book of Repulsive Women: 8 Rhythms and 5 Drawings was the first book of Djuna Barnes, originally published in 1915. Its risqué themes might have been deemed inappropriate for the times were they not sufficiently vague to be difficult to understand. This wasn't really a book, more a small chapbook with its eight poems and five drawings. Barnes later in life wanted nothing to do with this early effort, but as her reputation grew, so did interest in this odd work. Offered is the 1948 pirated reprinting of the original she was helpless to stop (the original had not been copyrighted). This is hardly a fine press printing job, but it sufficed to put Barnes' words and drawings on paper. $35.