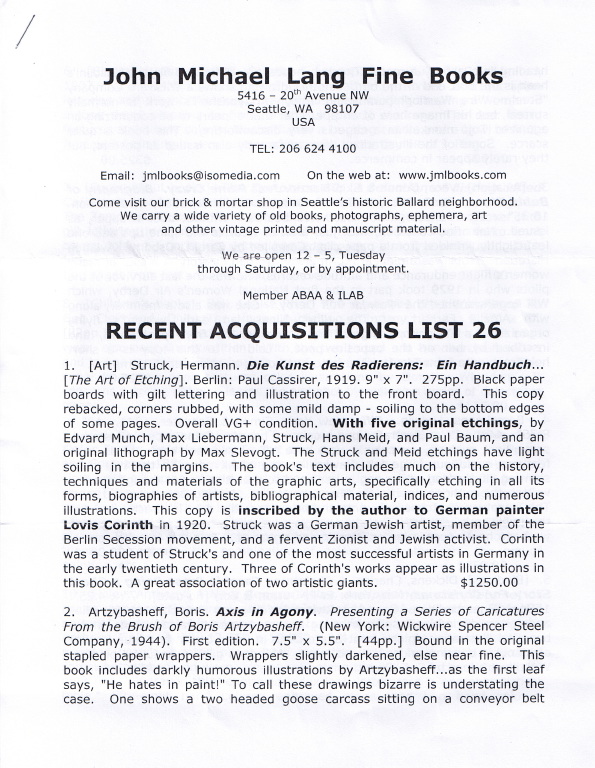 John Michael Lang Fine Books has published their Recent Acquisition List 26. These lists are notable for being both short and varied. Lang does not cram a lot of works into his lists. This one offers but 25 items. However, to say Lang is a generalist would be an understatement. Just about anything can show up on these lists, and it seems that it does. This one includes everything from books about art to aviation, atlases, children's books, exploration, wine, literature, book collecting, humor, biography, Hawaiian volcanoes, and a tuberculosis hospital. All of this and more offered in just 25 items! Here are a few.

Bobbi Trout may not be as well known as Amelia Earhart, but her accomplishments as a pioneering aviatrix were such that she deserved to be. She took her first airplane ride in 1922, and six years later, she had a license and her first solo flight. Hers was only the fifth airplane license granted to a woman. By the following year, she was breaking women's endurance records, starting with a flight of just over 12 hours. She would lose and regain that record, along with setting records for altitude and being the first woman to pilot an all-night flight. She would also break records for longest time in the air with assistance from co-pilots. She hoped to stay in the air for a month, but her planes sputtered out. The trick, or course, was in-the-air refueling. Trout participated in the Women's Transcontinental Air Derby, better known as "Powder Puff Derby" of 1929. She, like most competitors, suffered various forced landings, such as one wonders how they survived, but she managed to finish the race. At the end, several of the flyers, including the aforementioned Earhart, formed a women's flying organization, "The Ninety-Nines." Bobbi Trout was the last survivor of those pioneers, passing away in 2003 at the age of 97. Item 3 is Just Plane Crazy. Biography of Bobbi Trout, by Donna Veca and Skip Mazzeo, published in 1987. This copy is both signed and separately inscribed by Trout, and comes with a laid in handwritten note by Trout. Priced at $125.

Item 24 is an account of one of the most important expeditions into the American West. This is the senate issue of the Report of the Exploring Expedition to the Rocky Mountains in the Year 1842 and to Oregon and Northern California in the Years 1843-44, by John Charles Fremont. Fremont led four expeditions to the West, and came back with maps, discoveries, plants, and lots of descriptions. The first two trips, which are the ones covered in this official report, were the most successful. His last two, including one where he attempted meddle in the affairs of Mexican California, and a disastrous trip to the Southwest, were less noteworthy. Fremont would find himself in hot water, though by 1856, he had returned to sufficient good graces to become the first Republican presidential nominee. However, these two first expeditions were the great accomplishments of his long, controversial career. This book contains 22 plates and five maps, including the large folding map by Charles Preuss. $1,500.

Here is the work about the tuberculosis infirmary. Item 19 is Firland. A Story of Firland Sanitorium. We tend to forget, but these institutions were once found throughout the land, when TB was a common disease. Firland operated in Seattle from 1911-1973, with this book detailing the hospital's history published around 1935. $150.

John Michael Lang Fine Books is reached at 206-624-4100 or jmlbooks@isomedia.com. The website is www.jmlbooks.com.