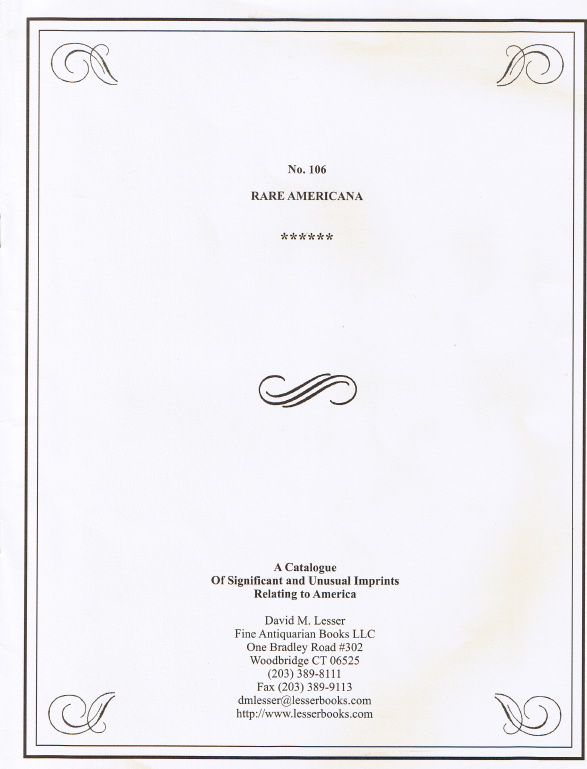 David M. Lesser Fine Antiquarian Books has issued their 106th catalogue of Rare Americana. It is, as usual, filled with interesting American works from the 18th and 19th centuries. These are mostly pamphlets, often obscure, with politics and theology the most prominent subjects. Other subjects include the law, government, railroads, education, slavery, medicine, prison, and even a few personal disputes. Polemics which helped elect William Henry Harrison and Zachary Taylor to the presidency are offered. Unfortunately, neither lived long enough to make much of an impact. However, a speech at Cooper Union in New York that is offered propelled a former Congressman from Illinois named Abraham Lincoln to a most eventful presidency. There is much of great interest awaiting the Americana collector this month.

Religious freedom may have been a calling card for the early Puritans, but that applied only to their own religious freedom, not that of others. Howes, in describing this item, wrote, "Witch-hunting was bad; this was worse." The persecution of the Quakers is well described in this work's title: New-England Judged by the Spirit of the Lord. In Two Parts. First, Containing a Brief Relation of the Sufferings of the People Call'd Quakers in New-England, from the Time of their First Arrival There, in the Year 1656, to the Year 1660. Wherein their Merciless Whippings, Chainings, Finings, Imprisonings, Starvings, Burning in the Hand, Cutting Off Ears, and Putting to Death, with Divers Other Cruelties, Inflicted upon the Bodies of Innocent Men and Women, only for Conscience Sake... You get the point. The unfortunate point is that it all happened. Included with this is Part Two plus An Answer to Cotton Mather's Abuses of the Said People... The charming Mather, who looked the other way during the Salem witch hysteria and then claimed to have had nothing to do with it, was equally unpleasant to the Quakers. Item 18 is the first edition of George Bishop's work to include both parts, published in London in 1703. Priced at $1,750.

Thomas Bacon, a minister from Maryland, held views similar to the aforementioned Mather with regard to slavery. Mather, in seeming enlightenment, believed slaves should be taught in the Christian religion as well as how to read. Most slave owners were afraid to teach their slaves to read for fear of what they might learn. However, Mather also believed blacks were being punished for the sins of some distant ancestors, so he supported the institution of slavery. His reasoning for educating slaves was his belief that educated slaves, particularly those who believed further punishment awaited them for not accepting their fate, would be more dutiful servants. Bacon, in his Sermons Addressed to Masters and Servants, and Published in the Year 1743, by the Rev. Thomas Bacon... encourages the education of slaves. He too, however, then informs them that God will be displeased if they are not obedient to their masters. Their reward will will have to wait for next world. Item 9 is an 1813 republication of Bacon's original work and a few others of a similar vein by Bishop William Meade, who encourages the education of slaves for all the wrong reasons. $500.