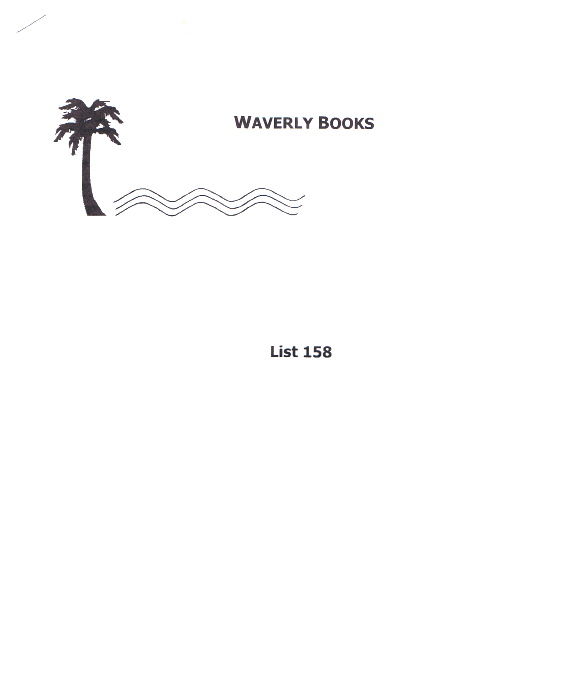 Waverly Books has issued a new catalogue of books, this one being List 158. Waverly's catalogues do not have titles, so there are no limitations as to what might be found in one. However, their focus is generally on literature or items related to film, sports or other fields where names will be familiar to many readers. This catalogue fits that mold. Here are a few examples.

Item 75 is a look back by a woman not very famous as an author, but probably the most celebrated mother America has known. Of her four sons, one died a war hero, one became president, and two others almost became president. One daughter was married to a man who ran for vice-president, another to a famous actor. A couple of grandchildren have served in Congress, a granddaughter was a noted news anchor and is now first lady of the nation's most populous state. Of course, this could be none other than Rose Fitzgerald Kennedy, and one can only marvel at the accomplishments of her famous descendants. While many in her family succumbed to tragedy too early in life, Rose lived to be 104. This copy of her 1974 book Times to Remember, published when she was a mere 84, is inscribed to the wife of tennis star Jack Kramer. $350.

Truman Capote burst onto the scene in 1948 with his first novel, "Other Voices, Other Rooms." It started the unusual young writer along a path of celebrity he obviously craved. Item 35 is a first edition of Capote's second book, The Tree of Night and Other Stories. It was published the following year, 1949, when Capote was still only 25 years old. $300.

Yogis are noted for their immense wisdom and insight, but none can compare with the great Yogi of New York, Lawrence Peter Berra. Yogi Berra was one of the best catchers ever to play baseball during a career that ran from the mid-1940s to the early 1960s. His honors include membership in the Hall of Fame. Berra went on to be a manager, and while little appreciated in that role, he managed to be one of the few to lead teams in both the American and National leagues to the World Series. A Yogi is not always recognized in his time. While his outstanding baseball years have drifted into the past as fewer and fewer people remember a career that ended 45 years ago, Yogi has become well known even among young people for his malapropisms, or "Yogiisms" as they are often known. Yogi probably never uttered most, but any strange twisting of logic or self-evident clichés seem to be attributed to him. Among the best known are "I really didn't say everything I said," "It's déjà vu all over again," and "It ain't over 'til it's over," which provided the title for this 1989 book, Yogi. It Ain't Over. This copy is inscribed by the wise man himself. Item 20. $200.

Some things go out of date, and yet they are timeless. Here is an example: Marilyn Monroe 1955 Calendar. This one features the full color nude picture of Miss Monroe, daring in its day, and still quite attractive in this one. Who cares that it's out of date? No one really paid attention to the calendar part anyway. Item 99. $250.

Item 70 is Roy Huggins' first edition 1959 paperback 77 Sunset Strip. The TV show of the same name was the rage at the time, and Huggins would go on to produce several more extremely popular television series. The stars of 77 Sunset Strip, were Efrem Zimbalist Jr. and Roger Smith, in the role of private detectives, but younger viewers were drawn to Edd Byrnes, playing the role of hair-combing hipster and valet parking attendant "Kookie." This copy is signed by Byrnes. We don't know whether he ever loaned his comb to Connie Stevens, the ginchiest, and he never had much of a film career after "77," but for a time he was atop the list of America's teenage idols. $75.