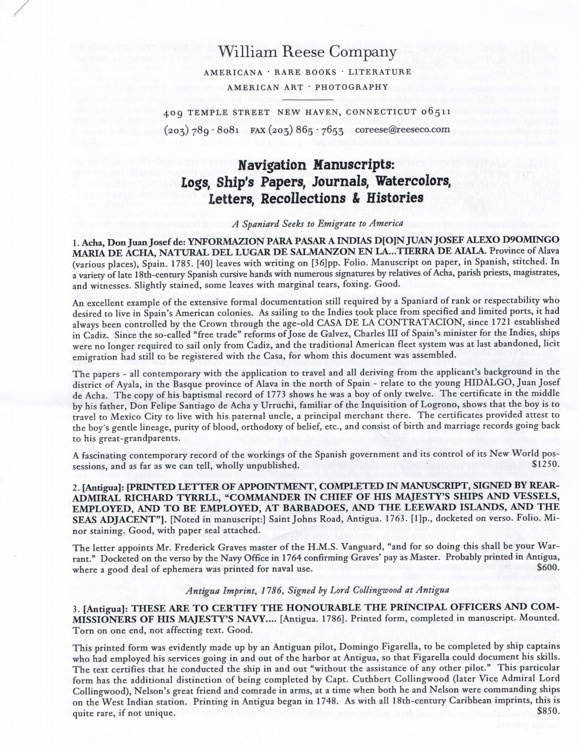 The William Reese Company has presented a list of items that will appeal to those fascinated by the day-to-day life of those at sea in the 19th and earlier centuries. These are not the official accounts of the great voyages of discovery, but mostly the journals of ordinary seamen, lower ranking officers, and simple travelers. They give a look at life at sea as it actually was, for some, quite pleasant, for others barely tolerable. By today's standards, these journeys would have been at best difficult, but no one expected the comforts we do today. Then again, the airlines are doing their best to return travel to the comfort level travelers experienced in the 18th and 19th centuries. The title of Reese's list is Navigation Manuscripts: Logs, Ship's Papers, Journals, Watercolors, Letters, Recollections and Histories. Here are a few.

In the days before the transcontinental railroad, the only was of crossing the continent, other than by foot, was going all the way around the tip of South America. The unnamed traveler who kept the journal offered as item 6 did just that, leaving on October 24, 1860. Anyone who has ever experienced the misery of seasickness will sympathize with his plight. "I was visited by the horror of horrors to all landlubbers at sea this morning," he writes. "My feelings are indescribable; was advised to eat, but could not; to exercise, but was too weak; the cabin was too close, the deck too cool; was finally obliged to seek a sheltered nook on the quarter-deck." For 105 days they sailed, suffering stifling heat as they passed through the equator, snow and hail as they rounded Cape Horn. Life on board until they reached San Francisco in February is thoroughly described. Additionally, a second manuscript describes a weeklong journey in California, where he visited the state capital in Sacramento, Stockton, and some gold mines. He comments favorably on the streets of Sacramento, where, unlike San Francisco, planks allow you to walk over the puddles of mud in the middle of the streets. Priced at $2,750.

The preceding voyage was a pleasure compared to this 1705-06 French journey. Item 19 is a manuscript account in French, Memoire ou Journal... by Mr. Malescot de Coulomiers. He sailed on the ironically named Faucon Anglois (English Falcon) on a journey of unknown purpose, but likely privateering. Malescot did not wish to go on this trip, noting "everyone speaks so unfavorably" of it, but was ordered to participate by his superior. Undoubtedly this would have started him off on the wrong foot, so it is no wonder that his journal, evidently prepared as a report for his boss, is so negative. Malescot describes the incompetence of their captain, Mr. Petit, and the insubordination and rebelliousness of his crew. Petit is pictured as indecisive and afraid of the crew. He launches treacherous and unprovoked attacks on local tribes along the African coast, later seizing a Danish ship, although their nations were not at war, because he believed it held gold. Meanwhile, a member of his crew, hoping to find the gold, ignites the ship's magazine, blowing it up and killing many on board. As bad as this voyage was, Reese notes, "it is probably more representative of such 18th-century seafaring ventures than most polite narratives." $20,000.