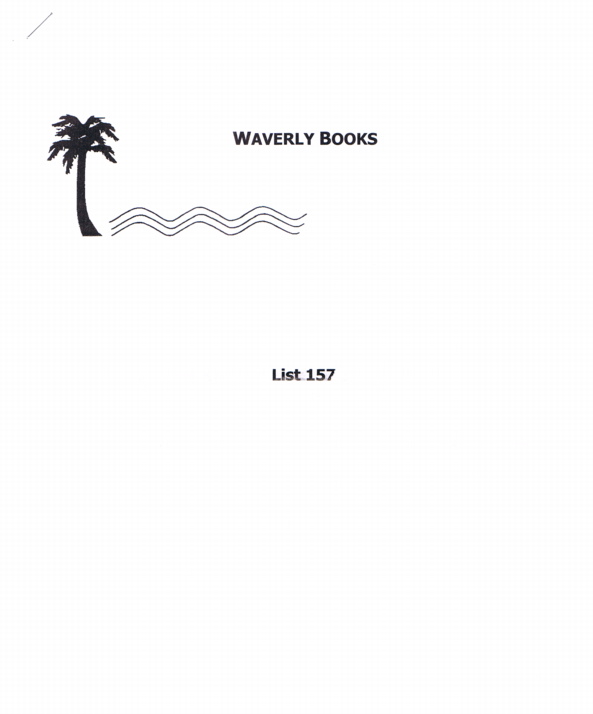 Waverly Books has issued a new catalogue of books and associated items, this one their List 157. It contains no specific description or subject, but what you will find is much 20th century literature in first or pre-publication editions, many items related to film and theater, as well as works relating to art, sports, mystery, and more. A large number of items are signed or inscribed by their authors or those associated with the works. This is a great assortment of moderately priced pieces suitable for many collections. Let's take a quick look at a few.

Item 64 takes us back to the very beginning of film: Two Reels and a Crank. From Nickelodeon to Picture Palaces, by Albert E. Smith (with Phil Koury). Smith and J. Stuart Blackton formed the Vitagraph Company in 1896 and, using equipment and reels purchased from Thomas Edison, began showing very short movies in New York. They quickly expanded into their own productions, achieving notable success when they accompanied troops to Cuba to film battles in the Spanish-American War. When they didn't have war footage, they improvised using miniatures in their Brooklyn studio, evidently fooling an audience still amazed by the very concept of moving pictures. By the turn of the century, Vitagraph was growing rapidly, and by 1910, Smith, Blackton, and a later added partner were wealthy. They had several offices across the U.S. and in Europe. A stable of then-famous actors helped them produce large quantities of popular silent films. Vitagraph was one of the first to expand from simple one-reelers to longer films requiring several reels (remember when movies stopped to change reels?). The First World War was costly to Vitagraph as they lost their European distribution, and by the 1920s, new, larger studios had come to dominate. Smith and his partners sold Vitagraph to Warner Brothers in 1925 for a healthy profit. Years later (1952) Smith published his account of those earliest days in the world of film. This copy is signed by Smith on the title page. Waverly notes that his signature is scarce. Priced at $500.

Here is a book that takes us back even further: When Geronimo Rode, by Forrestine Hooker. Mrs. Hooker was the daughter of a Civil War soldier who next served in the Indian campaigns of the Southwest under General Miles. After the turn of the century, Geronimo long since captured and the Indian campaigns over, she wrote several books about her experiences in the Old West. This is one. Item 77. Published in 1924. $150.

Item 11 is the story of a young girl who had a hard knocks beginning to life, but for whom things turned around after she was adopted by a very wealthy industrialist. This would be the beloved Little Orphan Annie, a figment of Harold Gray's imagination, but a very popular fiction. This particular iteration of Annie was published in 1947 as a giveaway premium by Popped Wheat. The cereal manufacturer gave away several comics that year, including Dick Tracy and Terry and the Pirates titles. What ever happened to Popped Wheat? $150.

Some people are not quitters. Such a man is Hiroo Onoda. Onoda's account of his determination and sense of honor are recounted in No Surrender. My Thirty-Year War. Onoda was one of those Japanese soldiers serving in the Philippines in World War II when America recaptured that country. He took off for the mountains, where he remained for another 30 years. It was not, as popularly imagined, that he was unaware that the war was over. He felt it was his duty to soldier on, and never surrender until so ordered by his commanding officer. When Onoda was finally located in 1974, the Japanese sent his old commander, now a bookseller, to the Philippines to order his surrender. Onoda finally complied. This autobiography of the last Japanese soldier to surrender is signed in both English and Japanese by its author. Item 175. $350.

For those who hear the call of the open road, or as it was in the day, the open railroad, there is Hobo Camp Fire Tales. It was written by "A-No. 1," also known as Leon Ray Livingston, and published in 1911. Livingston was noted for writing his "A-No. 1" moniker wherever he traveled, on fences, walls, and, naturally, the interior of boxcars. Livingston was not your common, everyday tramp, as he went on to write several books about his way of life. Item 1. $250.

You may reach Waverly Books at 310-393-4593 or waverlybks@aol.com. Their website is www.waverlybooks.com.