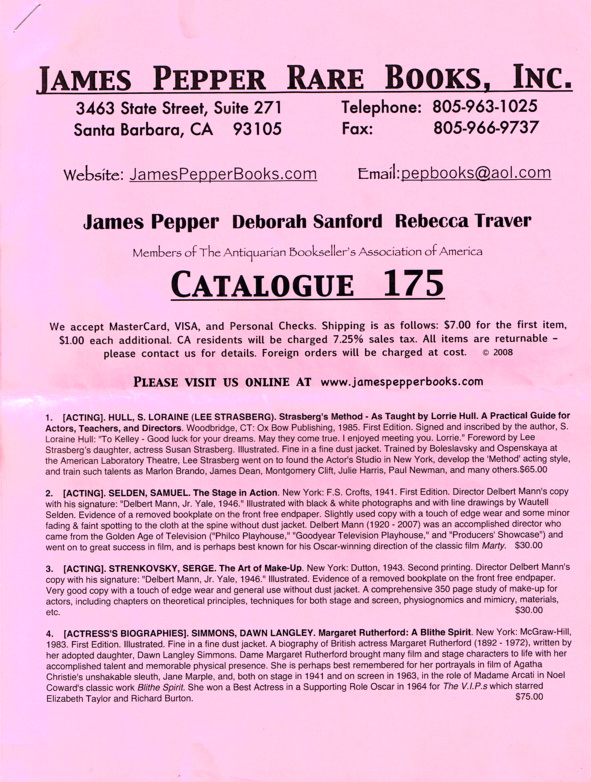 Catalogue 175 from James Pepper Rare Books has arrived, and it contains the type of material we would expect from a Pepper catalogue. There are many items related to film and theater, first and other early editions of literature, some mysteries, and always a few unexpected works. Here are a few from this latest offering.

Would you like to hire Allen Ginsberg? He attended Columbia University, where he learned about market research and journalism. He has traveled quite a bit, and is proficient in French. Oh yes...he also won some poetry awards at Columbia. Item 39 is Ginsberg's resume from 1952, while he was seeking employment as a 26-year-old market researcher. His references are Lucien Carr, close friend of Ginsberg, Kerouac and Burroughs, an odd choice as he had spent two years in prison for manslaughter though now working for UPI, and Mark Van Doren, a poet and Ginsberg's professor at Columbia. Apparently, this one-page resume did not land Ginsberg any compelling job offers, and he instead became a full-time poet. Item 39. Priced at $450.

While Ginsberg and the other "Beats" were perfecting their new forms of poetry and prose in relative obscurity, mainstream America was focused on other forms of entertainment. Young Americans in 1955 were more interested in coonskin caps and mythical heroes than Beat poetry. Item 30 is Walt Disney's Davy Crockett and Mike Fink. The Adventures of the King of the Wild Frontier and the King of the River... Disney managed to seamlessly mix the very real, but grossly fictionalized Davy Crockett, with the purely fictional Fink. Fink played second fiddle as Crockett became the rage of the day. Crockett was actually a remarkable frontiersman and former Congressman, one who defended the Indians when their cause was not popular, and, as all Texans well know, gave his life at the Alamo. However, by 1955, he had been transmuted into this strange Disney frontier superhero, who bore as much resemblance to the real Crockett as Superman did to Clark Kent. This item is a compilation of several Davy Crockett television stories, where he takes on outlaws, river pirates, and various scofflaws. It includes color photographs from the show, and is signed by its stars, including Fess Parker (as Crockett), Buddy Ebsen, who in the following decade would pack up and move his hillbilly family to Beverly, and Bill Hayes, who (along with Parker) recorded 1955's smash hit recording The Ballad of Davy Crockett (Hayes did a much better job than Parker). Hayes also moved to Beverly to become a star of the soap Days of Our Lives. $175.

Oh what webs we weave! But no one could weave them like Charlotte. Of course, Charlotte had the advantage of being a spider, but still, her webs with written messages are remarkable even for a spider. Item 138 is a 1952 first edition of E.B. White's children's classic, Charlotte's Web. $1,100.

Here is an animal from the children's book world who could have crushed Charlotte in an instant, but undoubtedly he was much too refined to do such a thing. No self-respecting Frenchman would be so uncivilized. Item 26 is Le Voyage de Babar, a 1932 first edition in French of Jean de Brunhoff's tale of the kindly French elephant. This copy is signed by Jean's son Laurent de Brunhoff, who took over the series after his father died at just 37 years of age. $550.

Bette Davis was one of the greatest actresses of the 20th century. Not naturally beautiful, she combined determination, ambition, and a willingness to portray dislikeable characters into one of the greatest film careers ever. Of course, she also had Bette Davis eyes. Item 6 is an original souvenir program for the film All This and Heaven Too. Davis starred in this 1940 movie and has signed this promotional book. $225.