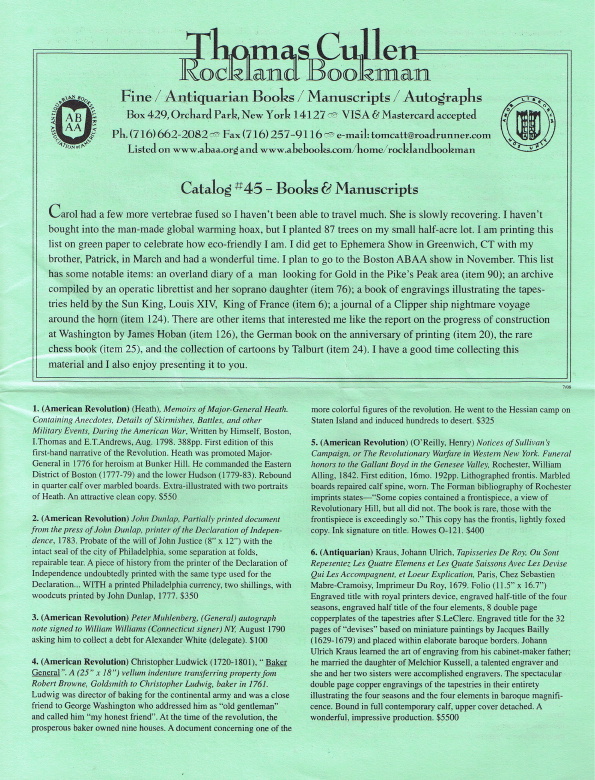 The unexpected can be found in Thomas Cullen's latest catalogue.

Thomas Cullen, Rockland Bookman has issued his Catalog #45 - Books and Manuscripts. This is an unusual collection of antiquarian items, filled with works that will fascinate anyone with an abiding interest in history. Most of the pieces are North American in origin, though there are European items as well. They range from government documents to biographies to books about art and exploration. Of particular note is the large number of manuscripts, ledgers, letters, and diaries, written by ordinary businessmen, travelers, citizens and settlers to family back home. This catalogue is filled with items that will bring back life as it was in earlier and very different times.

This catalogue is available not only in print, but online on this website in its entirety. A link is provided at the end of this review.

One of the most interesting of the unique items is reminiscences of ordinary people's contacts with the greats of their era. They add a little more information, otherwise unknown, to the their histories. Item 16 is an 1860 autographed letter from Benjamin Silliman, a Yale professor, then 81 years of age. He recounts hosting the Marquis de Lafayette back in 1824. "My little son," wrote Silliman, "then 8 years old was embraced and kissed by the general and the grandson of Gov. Trumbull the second. The General with his son George Washington [Lafayette named his son for America's Revolutionary leader] and his secretary Mons. Le Vasseur then resorted to my house." After having been absent from America since the days of the Revolution, Lafayette made a final, triumphant return to America in 1824, where he visited every state and most of the nation's leaders, being received as the great American hero he was. Priced at $300.

Here is a detailed look at one of America's presidents at a critical moment in history. The letter was written by Robert McGuffey from Baton Rouge on February 2, 1848, the day of the signing of the Treaty of Guadalupe Hidalgo, which ended the Mexican War. McGuffey had the opportunity to meet General Zachary Taylor, a hero of that war. Taylor was evidently not feeling well (McGuffey says "a nervous affliction of the legs") and was recuperating in his home state. Writes McGuffey, "...without any intention to boast of the honor, I must inform you...the hero of Monterey and Buena Vista paid his respects, in person, to me on board of our boat." Taylor was never too keen on the war, but was a loyal soldier, and McGuffey's impressions confirm this: "His feelings are against the war but as an instrument in the hands of government fully bound to obey. He says our army are scattering money in profusion throughout Mexico..." In a note of caution, McGuffey concludes, "Be careful not to make anything I have mentioned of the old Gen'l public to injure him." It seems unlikely that McGuffey would have been concerned with Taylor's reputation politically, as it was not until later that year that the Whig party drafted the "old Gen'l" to be their presidential candidate. Taylor said virtually nothing about his plans in the campaign, was elected, and promptly ignored most of the Whigs' political agenda. Despite being a southern slave owner, he pushed to quickly admit the new territories captured in the Mexican War as free states, and promised to personally lead troops into the South if that region rebelled. Taylor was probably the last hope to avoid civil war, but he died barely a year in office, and the weak presidents who followed simply compromised their way into the war they sought to avoid. Item 114. $500.