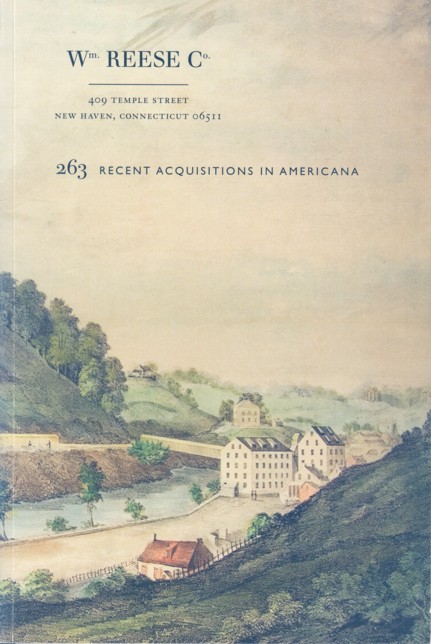 The William Reese Company has now issued their 263rd catalogue, Recent Acquisitions in Americana. The theme running through this catalogue is typical of what we would expect from Reese - items of early Americana that are highly collectible, of significance if not substantial importance, and always interesting. The difference from other catalogues is that these are recent acquisitions, so you will find things you probably have not seen before. Each is worth a look. These are a few samples of the almost 200 items offered.

Item 57 is a manuscript journal titled Journal Up To Lake Ontario by Stephen Cross, a colonial soldier in the French and Indian War. Cross traveled from his home in Newburyport to Fort Oswego, where the British found themselves under attack by, naturally, the French and the Indians. Ultimately, the British would win the war, but in 1756, they were no match for their opponents. The Fort was overrun and Cross and his fellows imprisoned. Some of the soldiers managed to fill their canteens with rum before surrendering, so once imprisoned at Fort Ontario, they proceeded to get themselves famously drunk. Writes Cross, they "...got intoxicated and soon began to fight with one another, with others singing, dancing, hallowing, and cahoosing." Unfortunately, some of the Indians also found the stores of rum. They went on a murderous rampage, and on hearing the prisoners at the fort, decided to settle a few scores. They attacked the fort and it took a determined effort by French guards to protect their prisoners. The indignity of it all, what with the French being the only sober ones present! The journal continues until Cross fell ill in January of 1757, by which point he had been transported to France as a prisoner. Eventually he was released and became a selectman in his hometown and a patriot during the American Revolution. Priced at $13,500.

Matthew Estes did not prove to be much better a prophet than he was a moralist in his 1846 book, A Defence of Negro Slavery, as It Exists in the United States. Estes trots out the usual claims of Biblical support for slavery and supposed superiority of the white race. He then describes the ultimate fate of what he calls "unimprovable races": "The Indian is already at a rapid progress towards extinction; the Hindoos, the Chinese and others of that grade, will soon follow." The Chinese and Hindus have not exactly disappeared from the Earth's population as he predicted. Item 65. $3,000.

Thomas Jefferson is remembered for many things, but paleontologist is not high on the list. Nonetheless, he was very interested in understanding, from large old bones discovered on the land, what sort of beasts wandered the American continent. Item 100 is a letter Jefferson wrote John Stuart on November 10, 1796, concerning the bones of an animal he dubbed the "megalonyx" (great claw). Stuart had written Jefferson to inform him of large bones discovered in Virginia, which Stuart believed came from some lion-like animal, though much larger. Jefferson, who was between jobs at the time (no longer Secretary of State, and not yet Vice-President), asked Stuart to make an all-out attempt to find a thighbone. That bone, he believed, would enable him to accurately determine the size of the beast. Jefferson's interest was perhaps more than just historical, as he believed the animal itself might still be living somewhere in the interior of the continent. Writes Jefferson, "I cannot however help believing that this animal as well as the Mammoth are still existing. The annihilation of any species of existence is so unexampled in any parts of the economy of nature which we see, that the probabilities against such annihilation are stronger than those for it." Stuart was never able to locate the thighbone, and a chance discovery of a magazine from London that described similar bones found in Paraguay, belonging to an extinct giant sloth, soon led Jefferson to revise his theory about the lion-like megalonyx. $65,000.