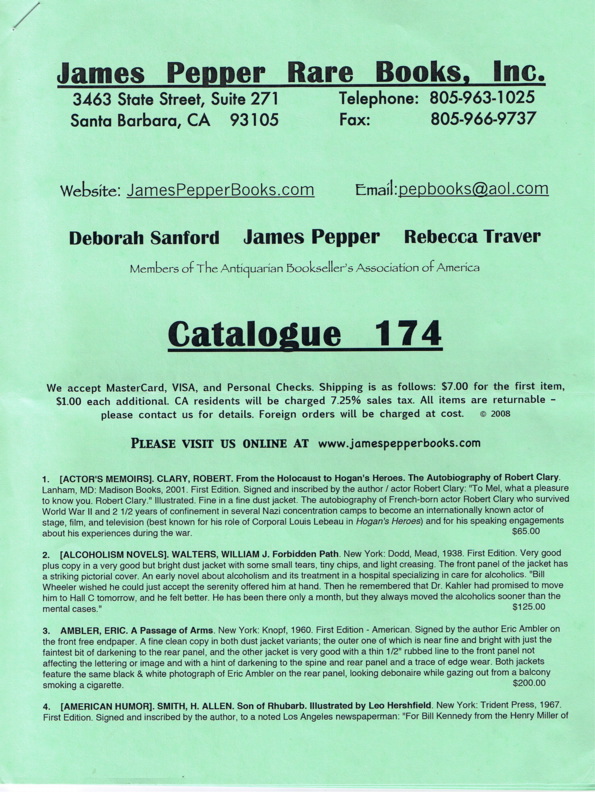 James Pepper Rare Books has just issued Catalogue 174. Like most Pepper catalogues, it is focused on literature, mystery, and the most famous business of Southern California - film. There are always a few exceptions, so this month we find books from Babe Ruth and a man who explored the Arctic with Peary. And, there are a few books from rock and rollers. There are many instantly recognizable names to be found within this catalogue along with the occasional obscurity. Here are a few samples.

For those who collect art books, item 29 is an inscribed copy of La Conquette de L'Irrational by Salvadore Dali. This 1935 Paris first edition features a color reproduction of Dali's portrait of his wife, Gala, and 35 black and white images. Among these are his most famous painting, "Le Persistence de la Memoire" (you know, the one with the melted watches). This copy was inscribed by Dali to Rene Magritte. Magritte was a fellow surrealist artist, capable of creating images as strange and thought provoking as those of Dali. Priced at $16,500.

Item 1 is a biography of an incongruous life of a man who must have a remarkable outlook. It is From the Holocaust to Hogan's Heroes. The Autobiography of Robert Clary. Clary, raised in France, was just 16 years old when he was deported to Nazi concentration camps in 1942. He was one of the few to survive (the only survivor of 12 members of his family so deported). With liberation finally coming almost three years later, he returned to France and managed to pick up his dreams where they left off. He wanted to be a singer-performer-comedian. Add to that, he also wanted to be an artist. In the years since, he has been all of these. In 1949, he emigrated to America, where he was most known in the early years as a singer. However, it would be the strangest of roles from which he gained his greatest recognition. He played prisoner of war Louis LeBeau, an inmate in, of all places, a Nazi prisoner of war camp during the Second World War. Somehow he managed to overcome the horrors of his own experiences to emerge both strong and with his sense of humor intact. This copy is inscribed by Clary. $65.

Item 19 was published in 1933 in Tarzana, California, and that can mean only one thing - this book was written by Edgar Rice Burroughs. However, this is not a Tarzan novel. Though Burroughs is by far best known for his Tarzan stories, he wrote many other types, notably science fiction, and even an occasional western. Here is one of the latter: Apache Devil. Burroughs inscribed this copy to his daughter and son-in-law, Joan and James Pierce, "with love and faith." James had starred in the title role in the 1928 silent film Tarzan and the Golden Lion, and he and Joan reprised Tarzan and Jane in the serialized radio show Adventures of Tarzan in the 1930s. $3,000.

Most people don't think of George Herman Ruth as an author. The Babe spoke with his bat rather than his pen. Nevertheless, you will find his name on Babe Ruth's Own Book of Baseball. This copy is part of a deluxe limited edition and is signed by Ruth. It was published in 1928 when the Babe was in the prime of his career. $16,500.