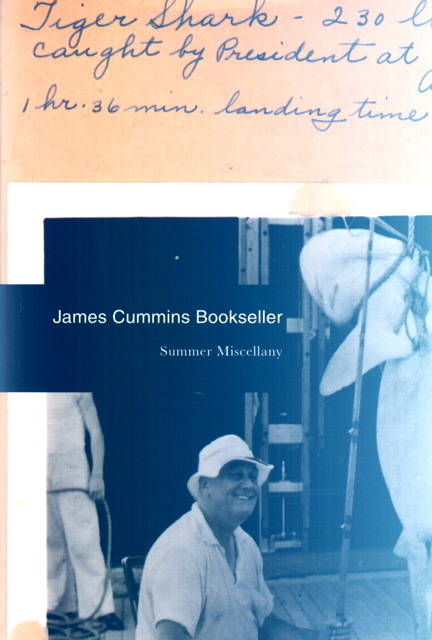 James Cummins Bookseller has issued a Summer Miscellany, and a miscellany it is. You can find anything here, from exploration to film, literature, children's books, photographs, peep show freaks, ship logs, items from President Roosevelt's vacations, and even a Lincoln broadside. That's not all, but we will save the rest for those who read this catalogue. As a preview, however, here are a few of the items you will find.

Item 10 is a children's classic, Little Lord Fauntelroy, by Frances Hodgson Burnett. It is the tale of an ordinary American boy who discovers he is an heir to British aristocracy. Along the way, he teaches his noble grandfather a thing or two about manners. Cummins notes that "[Reginald] Birch's illustrations of Fauntleroy set the style of upscale boys' clothing for years - much to the distress of the boys." This is a first edition, first issue, published in 1886. Priced at $1,500.

Here is one more for the kids. Item 39 is the first appearance of "Mary Had A Little Lamb," or as it was known at the time, Mary's Lamb. It appeared in the September/October 1830 issue of The Juvenile Miscellany. The work is generally credited to Sarah Hale, though there have been claims that others may have written part of the nursery rhyme. $2,000.

Item 54 is a 20-page autographed manuscript sermon from the last in the line of America's most famous theological family. The Mathers are remembered as both leading theologians and historians in the early days of America. Starting with Richard, the succeeding generations became even more noteworthy, first Increase, and than Cotton. Cotton's reputation was permanently darkened by his association with the Salem witch trials, but he was still the leading theologian of his era. Both Increase and Cotton died in the 1720s, leaving the family legacy to Samuel Mather, the fourth generation. Unfortunately, the family legacy faded away long before Samuel passed on. He was not nearly so influential, and was discharged from is church in 1741 for "improper conduct." He formed another church in Boston where he preached for the remainder of his life. One of those sermons is the one here offered, entitled Union between Christ and the Saints, written in 1777. It must be noted of Samuel Mather that though not the most gifted of preachers, and despite being the brother-in-law of Massachusetts's last colonial governor, the rabidly pro-British Thomas Hutchinson, Mather was a vehement supporter of the American Revolution. He was one of the nation's early patriots. $2,500.

Item 86 is a copy of the Autobiography of Sir Henry Morton Stanley from 1909, but it is what is tipped into the famed explorer's biography that is interesting. It is a handwritten application by Stanley for a license to marry Dorothy Tennant, dated May 24, 1890. Tennant was a noted artist, while Stanley, almost 50 by the time, was past the era of his major explorations. Instead, he settled down and became a Member of Parliament, a role he apparently disliked. Cummins notes of the marriage, "Though Stanley writes in this letter to apply for a marriage, it was actually Miss Dorothy Tennant who wooed Stanley and insisted on the union. The explorer suffered under his wife; she forbade his traveling to Africa again, forced him to run for Parliament, and exiled him to an English country house and an early death at 63." Other than that, she was a charming wife. $5,000.