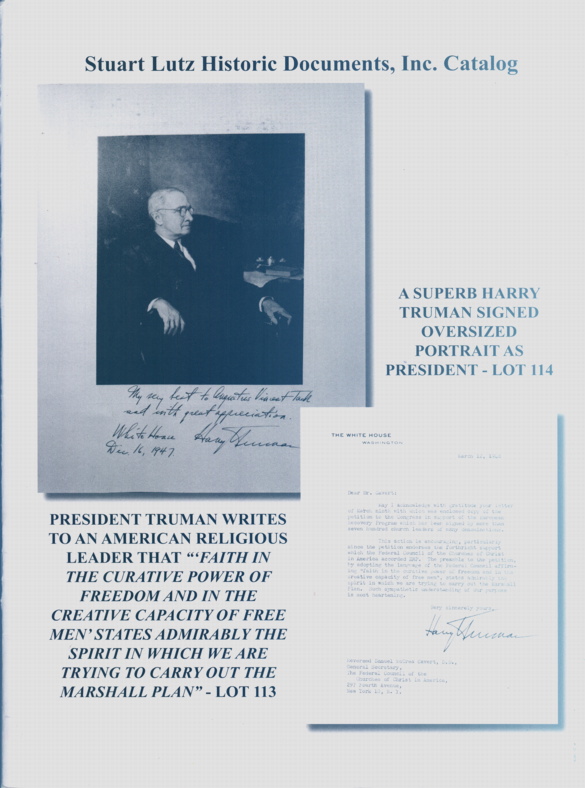 Stuart Lutz Historic Documents has issued a new catalogue of...exactly what you would expect. The catalogue does not have a title, but the contents can be described as, historic documents, overwhelmingly from Americans, with the vast majority signed. Being primarily signed documents, these are unique, one-of-a-kind items. Some discuss matters of great importance, others mundane concerns and formalities of the day. What ties them together is the historic roles each of these people played, whether in the arts, politics, finance, military, science, or other fields. Here are a few of these intriguing documents.

Thomas Edison was, of course, one of the giants of science, not the military. After all, he invented just about everything. However, the government asked his help during the First World War, appointing him head of the Naval Consulting Board. Naturally, they were looking to him for technological advice, not military strategy. In particular, the government looked to Edison to help devise ways of locating German U-Boats (undersea boats, or submarines). Item 37 is a January 9, 1918, signed letter from Edison to Admiral Edward Eberle. In it, Edison asks the Admiral to "please allow my assistant Mr. Silver to experiment in your laboratory for a few days until SP 192 gets out of the ice." SP 192 was a submarine patrol boat Edison was given to use, and it must have been temporarily iced in during the dead of winter, resulting in this request to use on land facilities instead. The letter contains a notation from the Admiral to another officer to grant permission to Mr. Silver. Priced at $1,500.

Well, there was one major invention of the era not attributable to Edison, and item 123 contains an amusing connection. It is an autographed letter from Thomas A. Watson to "George" explaining, "I have written the Telephone Company to put in the Telephone and Exchange and private line and have them working by June 5th." The telephone is the item Edison did not invent. It was invented by Alexander Graham Bell, and Thomas Watson was the Watson of Bell's famous instruction, "Mr. Watson. Come here; I want you." Those were the first words ever spoken over a telephone, during the year 1876. Now it was 1912, and Bell's valued assistant Thomas Watson had to apply to the phone company for service like everyone else. $900.

Item 48 connects a famous and serious American Supreme Court Justice with a strange comic performer. It is a copy of Felix Frankfurter Reminisces, a memoir by Justice Frankfurter. In it is the inscription, "for Harpo Marx, whose Susan, through the magic of her own charm, has endowed him with more charm than his own powers could generate. With the judicial and therefore sober regard of Felix Frankfurter February 8, 1962." Harpo was the mute member of the zany Marx Brothers, Susan his wife. This book is ideal for those who collect Justice Frankfurther or Harpo Marx, and perfect for anyone, should there be such a person anywhere on earth, who collects both. $750.