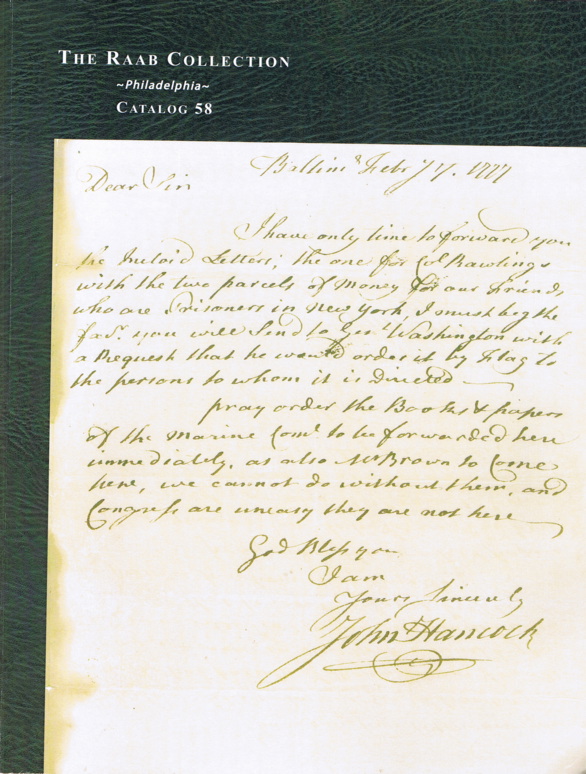 The Raab Collection just released Catalog 58, their latest collection of autographed documents. These are mostly from American signers, with a notable concentration of U.S. presidents. Not to be namedroppers, but those names include Jefferson, Madison, J.Q. Adams, Jackson, W.H. Harrison, Lincoln, Grant, both Roosevelts, Taft, Wilson, Coolidge, Truman, Eisenhower, Nixon, Kennedy, L.B. Johnson, Reagan, and G.H.W. Bush. There's even a Benjamin Harrison, but not the one who was president. It's from his great-grandfather who was a signer of the Declaration of Independence. Non-Americans include Victor Hugo, Enrico Caruso, Lafayette and Scottish bacteriologist and discoverer of penicillin Alexander Fleming (just to prove the latter didn't know everything about good health, the inscribed photograph show Fleming holding a cigarette).

Along with the most thorough descriptions imaginable of these items, images, and an explanation of their historical setting, the catalogue discusses other matters important to collectors, such as the care of manuscripts and how the market prices them. Here are a few of the items being offered.

We'll start with item 1, pictured on the cover. There is no more famous American autograph than this one. The man's name has become synonymous with a signature. On February 7, 1777, John Hancock wrote to fellow signer of the Declaration of Independence Robert Morris concerning some money to be sent to two American officer prisoners of war. Early in the Revolution, American troops had been overrun by the British in New York with thousands taken prisoner. Their conditions were deplorable, and there was not a whole lot the cash-strapped patriots could do but provide a small amount of help. Hancock has signed the letter with his flourished signature, same as on the Declaration. Priced at $50,000.

The greatest non-American American hero must be the Marquis de Lafayette. A young Frenchman of noble upbringing, he traveled to America while still in his teens to join Washington and the patriots' cause. He fought and led his men bravely through several battles before returning to France to drum up support in that nation for the American cause. In 1779, he wrote from France to Dr. John Cochrane, George Washington's personal physician, nicknamed by Washington "Dr. Bones." Cochrane, on Washington's instruction, had treated Lafayette when the latter was wounded. Lafayette expresses his love for America, appreciation for "Dr. Bones," and his hope at returning to America soon. However, Lafayette is not all seriousness, as he closes with, "...whenever I meet with carousing, hollering, and drinking, I call again to my mind the happy days you have past in Boston..." Boston hasn't changed much in the past couple centuries. Item 2. $25,000.