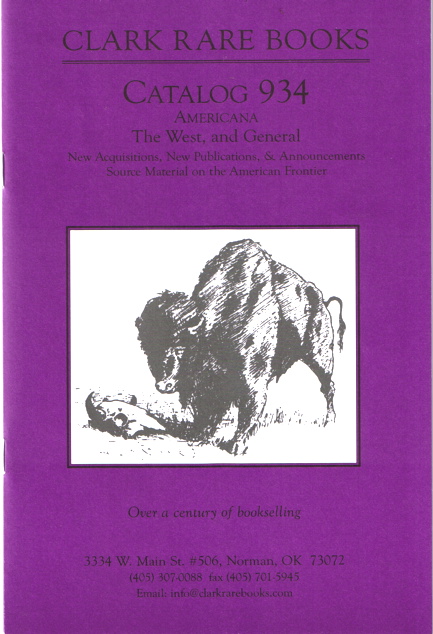 Clark Rare Books offers some new items from the West.

Clark Rare Books has issued their Catalog 934 of works on the West, Americana, and more. This one features many new acquisitions recently made by the firm. Clark notes that they recently obtained a large collection of Western Americana on a West Coast trip, and those items are starting to make their way into their catalogues. Additionally, their related publisher, the Arthur H. Clark Company (now an imprint of the University of Oklahoma Press), is publishing four new works of Western American history. We will take a look inside the latest in this long-running series of catalogues.

It's summertime, time to travel. And where better to go than sunny Southern California? You may say that vacations are not affordable in difficult economic times such as these, but 1932 was no great shakes economically speaking either. That's when the All-Year Club of Southern California published its Guide Book for your Southern California Vacation. It covers the sights and activities available in Southern California, along with information on hotels, restaurants, transportation and nightlife. Of course, it describes the local climate, and contains a list of the home addresses of movie stars. It's doubtful any of them still live there, or anywhere, but some of those old houses are probably still around. Item 53. Priced at $35.

Here is another look at the area, from German tourist Ludwig Salvator: Los Angeles in the Sunny Seventies; a flower from the golden land. There may have been flowers in the "sunny seventies," but no flower children, love bugs, hot pants or disco music. No, not even Hollywood. This was the 1870s. Instead of movie stars, Salvator writes about Indians and Orientals, cattle, irrigation, mining, and all of those things you would never associate with Southern California anymore. Item 77 is a 1929 translation of a book originally published in German in 1878. $115.

Traveling to California in Salvator's time would not have been easy, but this book would have helped: Crofutt's Trans-Continental Tourist, containing a full and authentic description of over five hundred cities, towns, villages, stations, government forts and camps, mountains, lakes, rivers; sulphur, soda, and hot springs; scenery, watering places, summer resorts; where to look for the hunt: the buffalo, antelope, deer and other game; trout fishing, etc., etc. Obviously this guide goes back, as no one is looking for government forts, sulpher springs, watering places, or buffalo hunts anymore. The transcontinental railroad had only recently been completed when George Crofutt published his guide in 1874. This was actually the sixth annual edition, so there is much on traveling by stage and boat as well as railroads across the vastness of the young land. Item 190. $175.