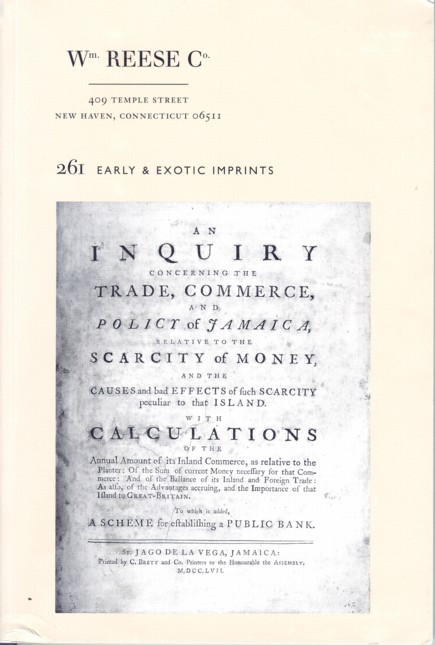 Early and Exotic Imprints from the William Reese Company.

The most recent catalogue from the William Reese Company, number 261 of this three-decade long series, is entitled Early and Exotic Imprints. It is divided into three parts: first, the United States and Canada, next the Caribbean and Latin America, and finally, the smallest section covers the remainder of the world. With the last group heavy in imprints from Mauritius, Tasmania, and Greenland, you might get an unusual impression as to what were the world's most important printing centers in the 18th and 19th centuries. Nevertheless, the collection of works from the Western Hemisphere is both extensive and quite interesting, or "exotic" as the title states. These are not items with which you are necessarily familiar, and you won't find them everyday. Here is a look at a few of these items of "exotica."

Item 5 explains one reason why New York needed a printer. It is a city form, published during the reign of Queen Anne. That dates it to sometime between 1702 and 1714, and it would have come from the press of New York's first printer, William Bradford, as he was the only game in town at the time. This is a blank license form, which entitles the as yet unnamed merchant "to sell wine, beer, brandy rum, syder, or any other sorts of strong liquors by retail." New Englanders may have had their tea parties and been debating theology and witches, but New Yorkers had other spirits on their mind. Priced at $850.

Who would have thought little New Hampshire would have been ready to take on the Royal Navy during the Revolution? Well, this is the "live free or die" state, and these ornery Yankees were not about to put up with anyone taking their freedom. In 1776, the newly self-declared independent state issued An Act for Encouraging the Fixing Out of Armed Vessels, to Defend the Sea Coast of America, and to Cruize on the Enemies of the United States Colonies, as also for Erecting a Court, to Try and Condemn All Ships...Goods, Wares and Merchandizes Belonging to Any Inhabitant or Inhabitants of Great Britain, Taken on the High Seas. New Hampshire may not have had a navy, but they were determined to make up for it by encouraging privateers to harass the British on the high seas on the state's behalf. Item 42. $1,500.

Many Englishmen were sent on extended "vacations" to Australia in the early 19th century, but very few Americans were sent off to be unwilling settlers of the land down under. However, Linus W. Miller was granted unwanted passage to the British penal colony in 1840. Miller was an American who joined the rebels in the ill-fated Canadian Revolution of 1837-38. He was just 22-years-old at the time, and he would spend most of his 20s in unpleasant surroundings for his participation in a lost cause. Reese notes that there are nine published accounts by exiles to Australia from the Canadian rebellion, but this is one of the best. Miller recounts incidents from the rebellion, his trial, and his time in Australia. Eventually, he was pardoned and returned to his home in upstate New York, where in 1846 he published Notes of an Exile to Van Dieman's Land... Item 13. $1,750.