North (and South) to the Poles from Aquila Books 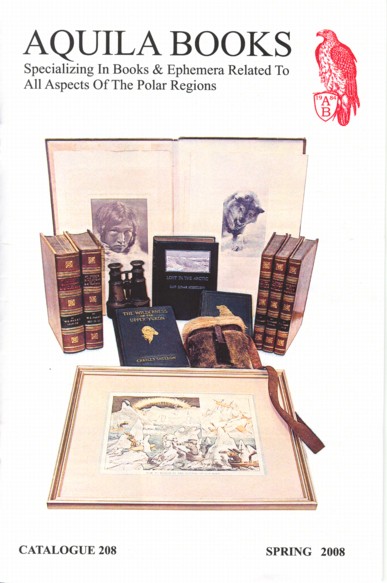 Aquila Books of Calgary has issued its second catalogue of the year, Catalogue 208. Aquila specializes in books and ephemera relating to the Polar Regions or other territories so far north or south that few of us who are neither polar bears nor penguins could survive. Nonetheless, many intrepid humans have ventured to explore these barren lands, even in the era when such journeys were not even remotely safe or comfortable. Many of these brave souls never returned. We can only wonder at the courage and sense of adventure they possessed, and perhaps question their sanity. Whatever their motivation, they have left us with adventures to relive from the warmth and safety of our homes. Here are a few of their amazing tales.

Item 14 is the all-time classic polar horror story: The Worst Journey in the World. Antarctic 1910-1913, by Apsley Cherry-Garrard. It wasn't that nice. Cherry-Garrard writes, "Polar exploration is at once the cleanest and most isolated way of having a bad time which has been devised." Cleanest because you never change your clothes, but still don't get dirty. Cherry-Garrard was an assistant zoologist on the Robert Scott expedition to the South Pole. Scott hoped to be the first to reach the pole, but when he arrived in January of 1912, he discovered that Roald Amundsen had beat him by a few weeks. It got much worse from there, as terrible blizzard conditions prevented Scott and his three companions from returning to base camp. They died in the ice and snow. Cherry-Garrard was one of those who found their bodies. However, the author had his own terrible personal adventure as he and two others set out on a side trip to observe emperor penguins. He was the only one of those three to make it back alive. Offered is a first edition, published in 1922, of what Aquila notes has been described as "the best polar book ever written." Priced at $7,500.

Item 77 is a promotional piece with a polar connection: Gabardine In Peace and War. This circa 1911 publication promoted gabardine, a fabric created by Burberrys for outdoor use. One of the chapters features testimonials from some of the great polar explorers, Scott, Shackleton and Nansen. Of course, as previously noted, Scott froze to death, which probably wouldn't be too helpful for sales, but perhaps he wasn't wearing his gabardine underwear at the time. $100.

The man who beat Scott to the South Pole, Roald Amundsen, went on a speaking tour to share his discoveries. Item 3 is a small broadside promoting his stop in Toronto, likely from 1913. It is headed Massey Hall the Greatest Lecture Since the Days of Henry M. Stanley. Capt. Roald Amundsen Illustrated Lecture "How I Discovered the South Pole." Seats ranged from $.50 to $1. $125.

Some of the best early descriptions of Greenland come from the Moravian orders who went there to mission to the natives. Why the Moravians were so intent on Greenland is unclear. Perhaps all of the more temperate lands had been taken by the larger religions. Whatever the reason, David Crantz of The Brethren's Society for the Furtherance of the Gospel Among the Heathen produced the two-volume work The History of Greenland, Containing a Description of the Country, and Its Inhabitants: And Particularly, a Relation of the Mission... Item 17 is a first English edition, published in 1767. $1,750.