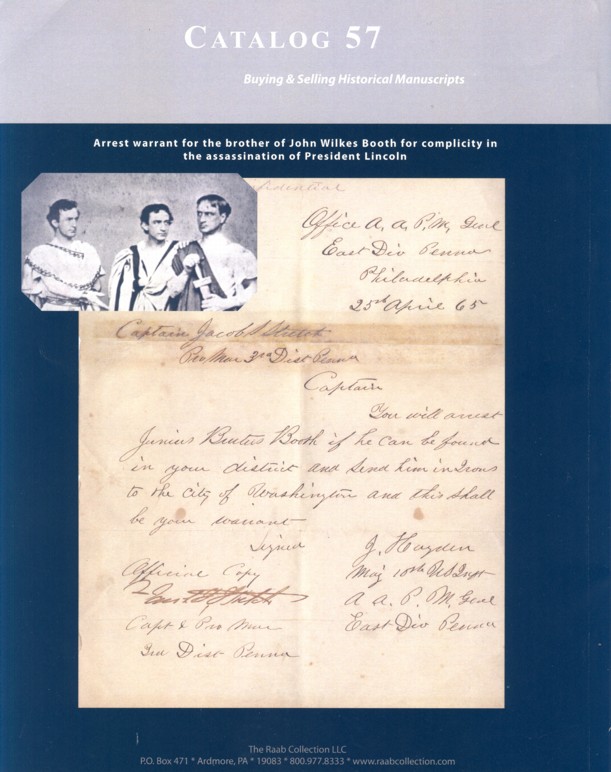 Catalog 57 from The Raab Collection.

The Raab Collection has issued a spectacular new catalogue of historic manuscripts and other signed documents and autographs. While primarily American in origin, there are several British items, from names such as Winston Churchill, Benjamin Disraeli and Queen Victoria, within the pages of Catalog 57. This is a catalogue filled with the most important names in American history, Washington, Lincoln, Kennedy and the like. While government and political leaders lead this pack, there are also important names from other fields, including Edison and Martin Luther King. Then there are the personalities who crossed over multiple fields, such as President and General U.S. Grant, or Benjamin Franklin, who did almost everything. Add to that people whose importance covered multiple nations, such as Gandhi for India and England, or King George III, a British ruler who was well known, though hardly beloved, in America.

What makes the Raab catalogue extraordinary, besides the quality of material offered, is the detail in the descriptions. Each item is not only explained in detail, buts its historic setting is also fully described. Recognizing the circumstances of a letter or document can be key to understanding its meaning and significance. Raab provides complete explanations of the documents' circumstances, giving us informative history lessons along with an opportunity to own a piece of that history. Here are some of the documents they are offering.

Item 6 touches on a major event in American and British history, and it is filled with irony. It is a note from King George III, requesting a meeting to hear greater details of Cornwallis' supposedly successful campaign in America. Cornwallis had technically won the Battle of Guilford Court House on March 15, 1781, but the victory came with major troop losses. Cornwallis, believing he had conquered the more southern states, next decided to turn his attention to Virginia. He hoped to once and for all seal off the southern states, allowing the British to defeat the rebels in the north. Instead, he suffered defeat at Yorktown, which effectively ended the war. However, based on early good news, King George, in calling for a more detailed report, wrote on June 4, 1781, "The letters from Ld Cornwallis show how well he has conducted his enterprise." Priced at $17,000.

Here is a remarkable piece of ephemera I never would have believed you could buy - Martin Van Buren's passport. Van Buren was America's eighth president, Andrew Jackson's handpicked successor. He was the survivor of Jackson's cabinet upheaval during the latter's first term in office. After Jackson's split with Vice-President John C. Calhoun, and a scandal involving the wife of his Secretary of War, Jackson called on his cabinet to resign. That included Van Buren, who was Secretary of State. Van Buren, despite being a favorite of Jackson, had to go to make the housecleaning appear even-handed. Therefore, Jackson instead promptly appointed Van Buren as his ambassador to Great Britain, an extremely important and prestigious position at the time. Item 15 is the very passport Van Buren took with him to England on his new assignment. It states that Van Buren is America's "Minister Plenipotentiary" to Britain, and is signed by his successor as Secretary of State, Edward Livingston, dated August 1, 1831. Ultimately, as a result of Calhoun's maneuvering, the Senate failed to approve Van Buren's appointment, but Jackson got the last laugh. He had his ally nominated by the Democratic Party for vice-president in 1832, replacing Calhoun on the ticket. Van Buren was elected vice-president in 1832, and then as president four years later. $2,000.