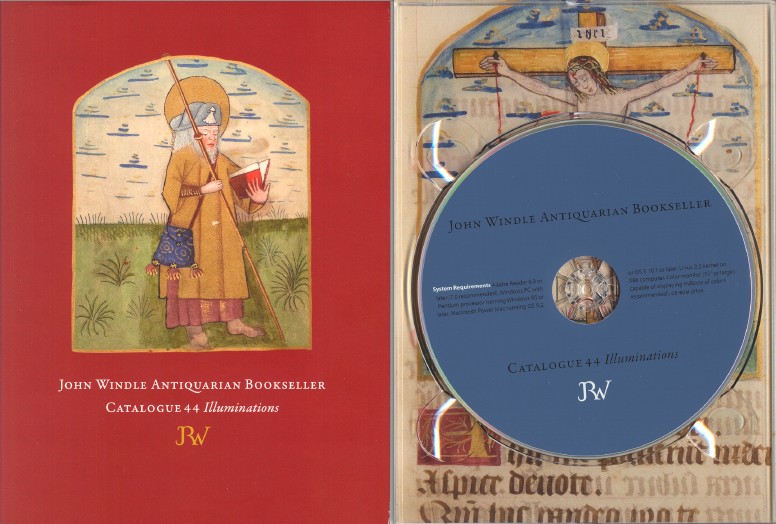 Front cover of Windle catalogue, which opens to reveal CD inside.

This month we received a "catalogue" that is truly a link from the paper to the digital world. It is called Catalogue 44 Illuminations from John Windle Antiquarian Bookseller. It is a smallish catalogue, but something quite unexpected happens when it is opened. On the left side is a pamphlet containing listings and small images of the various illuminated manuscripts and leaves offered. On the right side is a CD, and within its silvery bytes are large, high-resolution images of these works, the type of images required to truly do justice to what is offered. The pamphlet provides brief descriptions and small images, in effect an index. The CD contains the detailed descriptions and the large, clear images you need to fully appreciate what Windle has to offer. What's more, it enables Windle to provide dozens of images from these manuscripts, a quantity not practical to show in a printed catalogue.

Item 1 is a Book of Hours which had no choice but to be a manuscript, as it predates printing by half a century. This is actually a composite book, the first part dating from 1400-1410, but generously supplemented around 1480. As expected, the text is largely in Latin, though partly in French as well. However, it is the illumination that is spectacular, both in the images and initial letters and borders. The core illuminations were done in the very early years of the 15th century in Paris. The remainder appears likely to have been created in Poitiers at least two generations later. Priced at $375,000.

Item 3 is another very old manuscript Book of Hours, this one from the era of the first printing press, circa 1450-1470. The illumination was believed to have taken place in Bruges in the southern Netherlands (now Belgium). The decoration here appears to be in the style of Bruges' artist Willem Vrelant, though some of the leaves may have come from an earlier work. $145,000.

Item 7 is a Book of Hours that takes us to northern France, from the earliest days of the 16th century, 1500-1510. Again we have a manuscript that is richly and colorfully illuminated, and the French being the French, they have managed to find an excuse for including a nude woman in this religious text. If the artist had it right, Bathsheba, depicted bathing nude in a small pond, was every bit as lovely as David found her to be. $145,000.

Along with the complete manuscripts, Windle has numerous single leaves to offer. Item 11 is a particularly old one, circa 1150, from Italy. This large vellum folio page, text on both sides, includes 46 lines of text in black and red with three large initials. It was taken from a missal or lectionary. $3,750.