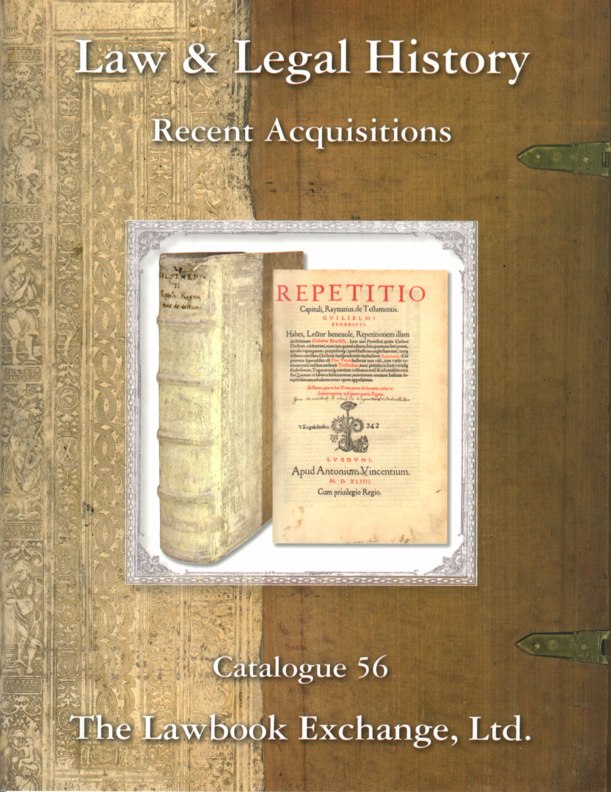 Catalogue 56 from the Lawbook Exchange.

From The Lawbook Exchange we have received Catalogue 56 of Law and Legal History. It offers a combination of very old legal works, as far back as the 16th century, classics within various fields of law, a few recent reprints, and some less legalistic books still related to the law. Here are some of the books we found.

Item 42 considers a legal issue that became a major source of antagonism between America and its former colonial master in its early years after independence. Indeed, it was a major factor in driving the two nations into the War of 1812. Published in 1814, the book is A Treatise on Expatriation, by John Hay, the U.S. Attorney for Virginia. It is likely he had input from Jefferson, Madison and Monroe in preparing this work. This was the issue of impressments of American citizens into the British Navy. The British had the nasty habit of stopping American trading ships on the high seas and forcing their sailors into the British Navy. The British "reasoned" that anyone born a British subject was still a British subject, that they could not renounce their citizenship. This meant that American sailors born during colonial times were still considered British citizens by that nation, and therefore subject to impressments into the military the same as any Englishman born on the British Isles. The practice was never officially resolved by that stalemate of a war; the British not giving up their supposed right of impressment. Nevertheless, the British had the good sense to abandon the practice after the war. Priced at $650.

Here is another work touching on the problems that would develop between Britain and America, but this one is very early, at a time when no one could have imagined how far they would go. It is Memoirs and Considerations Concerning the Trade and Revenues of the British Colonies in America: with Proposals for Rendering Those Colonies More Beneficial to Great Britain. This book by John Ashley, published in 1740, was designed to avert any hard feelings caused by trade regulations imposed by the mother country. Instead of following the traditional model of trading only with the mother country and its colonies, the Americans were trading with the Dutch and French colonies. This was a source of friction. However, America was not like the typical colony, peopled by foreign natives and ruled by loyal British overseers. America was peopled by British colonists looking out more for their own interests than England's. Confrontation was inevitable, though it was avoided for a couple more decades, in part because both sides were busy fighting the French. Item 6. $1,500.

Item 38 is the first compilation of the laws of South Carolina: The Public Laws of the State of South Carolina from its First Establishment as a British Province Down to the Year 1790... by John Grimke, published in 1790. It included all of the old British laws that were applied in South Carolina, along with the recent ones of statehood and membership in the Union. Grimke fought in the American Revolution and went on to be the chief judge in South Carolina. He owned a large plantation and many slaves, yet there must have been something unusual in the upbringing he gave his children, as several became reformers, daughters Sarah and Angelina became leading abolitionists (which forced them to move from South Carolina), and his partly black grandson from his son Henry was one of the founders of the NAACP. $4,500.