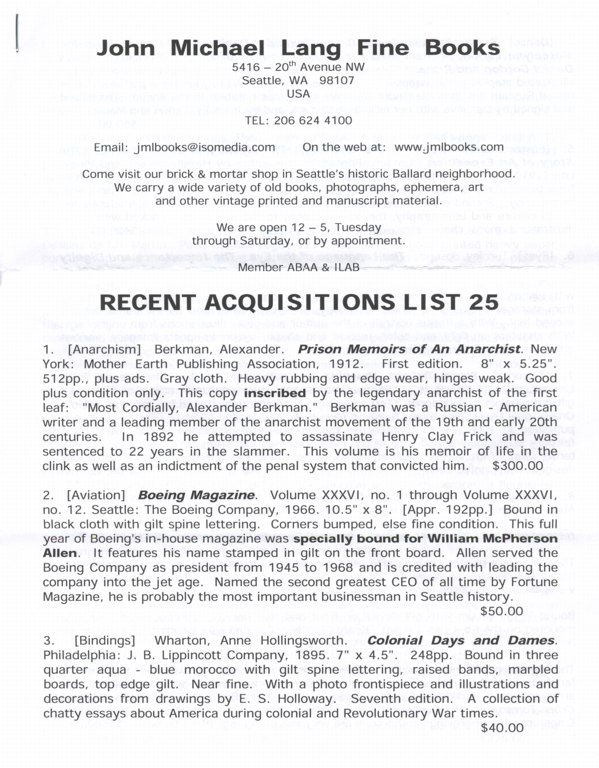 John Michael Lang Fine Books has issued their Recent Acquisitions List 25. As usual, these are not long lists, this one containing just 30 items. However, they cover a broad range of topics. You never really know what you may find in one of these unless you see it. So, here we go with a few items from this newest selection.

Item 1 is a classic politico-prison tale, Prison Memoirs of An Anarchist, by Alexander Berkman. It was published in 1912 by Mother Earth Publishing of famed anarchist leader Emma Goldman. Berkman was a close associate of Goldman, along with being intimately involved with the lady. Berkman had attempted the ultimate act to wake up America to his cause. In 1892, the steelworkers in Homestead, Pennsylvania, went on strike after Andrew Carnegie determined to break their Union by offering a new contract that included massive wage cuts. The Union went on strike, Carnegie Steel called in private security, strikebreakers, and eventually the state militia to impose its terms. Much violence later, the Union was effectively broken. However, during the Homestead Strike, Berkman attempted to assassinate Henry Clay Frick, Carnegie's associate who was placed in charge of the Homestead action. He managed to shoot Frick three times, and stab him a few more, but Frick survived. Berkman was sentenced to 22 years in prison and served 14, which became the subject of his book. After his release, Berkman would work for Goldman's Mother Earth, but both would be deported from America during the First World War. Berkman was sent to the Soviet Union, but quickly became disillusioned with the repression of the Communist regime. He left after two years, but his attacks on the Soviets made him unpopular with many on the left who were unwilling to see in the Communists what Berkman had seen with his own eyes. He and Goldman moved to Germany, and he spent his last years in France, dying in 1936. This copy of his book is inscribed "Most Cordially" by Alexander Berkman. Priced at $300.

Sir Edmund Hillary is best remembered for his 1953 ascent to the top of Mount Everest. However, five years later, he would participate in another expedition which, while not as high, was equally as cold. This was the Commonwealth Trans-Antarctic Expedition. Hillary achieved another first here, this time being the first to cross the Antarctic going through the South Pole. In fact, this 1958 expedition was the first to even reach the Pole since the dual visits by Amundsen and Scott in 1911-12, the first, second and only overland visits. In fairness to Amundsen and Scott, Hillary used motorized vehicles and had aircraft to scout the territory and be available for assistance, not available back in 1911. Nevertheless, it was still quite cold down there. Item 20 is The Crossing of Antarctica. The Commonwealth Trans-Antarctic Expedition 1955-1958, by Hillary and Sir Vivian Fuchs. This copy is signed by Hillary. $100.

Item 17 is a book I will admit to not fully understanding: Demoniality, or Incubi and Succubi. A treatise wherein is shown that there are in existence on Earth rational creatures besides man, endowed like him with a body and a soul, that are born and die like him, redeemed by our Lord Jesus - Christ, and capable of receiving salvation or damnation. Rev. Father Sinistrari (what a great name for an author of a book like this) must have believed this stuff when he published his book in 1879, though most scientists probably would not agree. The incubus (plural incubi) is some sort of human like creature that sexually forces itself on sleeping women, to gain energy from his victim and to propagate his species. The less common succubus is the female version. Presumably, there are some incubi among us though we don't notice them from others. Unfortunately, we do on occasion hear of people who act like incubi. $350.

For those with an interest in aircraft manufacturer Boeing, item 2 is a set of magazines that spent their early days at the seat of the company's power. This is a bound edition of the twelve issues of volume 36 (1966) of Boeing Magazine, the firm's in-house publication. Stamped in gilt on the cover is the name of William Allen McPherson. McPherson served as President of Boeing from 1945-1968, leading the firm into the jet age. $50.

John Michael Lang Fine Books may be reached at 206-624-4100 or jmlbooks@isomedia.com. Their website may be found at www.jmlbooks.com.