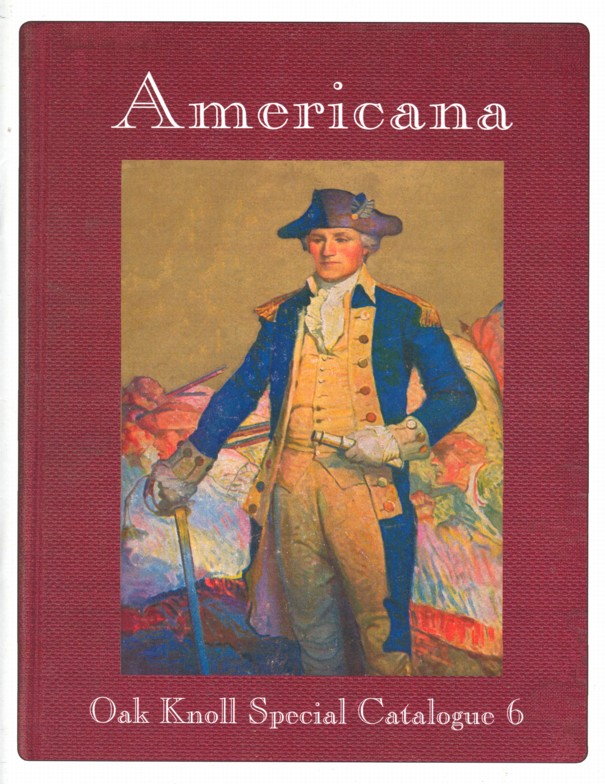 Americana is the subject of Oak Knoll's sixth special catalogue.

Oak Knoll Books has issued the sixth installment in their series of special catalogues, aptly named Oak Knoll Special Catalogue 6. It is also quite logically headed Americana. This catalogue includes various types of works in the field, some being within their typical area of "books about books" as well as about America, others being reprints of early items of Americana, and many being early copies of antiquarian American works. Those who collect Americana may not typically look to Oak Knoll as a source for books, but here is a chance to expand your resources. These are a few of the items we found in Oak Knoll's "special" catalogue.

Item 7 is a look at colonial America from the eyes of a Frenchman, Georges Marie Butel-Dumont: Histoire et Commerce des Colonies Angloises, dans l'Amerique Septentrionale... published in 1755. This is an interesting date as it came out just after the outbreak of the French and Indian War, which would a few years later separate France from its one-time colonies in Canada and Louisiana. Surprisingly, this French-language book was published in London. Butel-Dumont believed that Britain's American colonies were a major source of its wealth, and he attributed the economic success of those colonies to the relative freedom their people enjoyed compared to those of most nations (of course, once the French and Indian War was over, the colonists soon determined that they were not as free as they wished to be). Offered is a second printing of the first edition. Priced at $400.

Item 6 is a later French work about what had now become the United States: New Travels in the United States of America, Performed in 1788, by Jean Pierre Brissot de Warville. This is a 1793 first Irish edition of a work about a country he for the most part admired. The one shortcoming this advocate of human freedom found was the institution of slavery, but he was an optimist, believing in time it would be eliminated. Brissot was a friend of Jefferson, whom he consulted on some of his writings about America. Brissot went on to be a leader of the French Revolution, and was considered a hero at the storming of the Bastille. Sadly, the excesses of that Revolution caught up with him, and the year in which this Irish edition was published was also the year the French radicals led Brissot to the guillotine. $400.

Item 34 was an early, though flawed attempt to explain the mounds of the North American Midwest. William Pigeon was an Indian trader and amateur archeologist who came up with explanations based in part on legends learned from the Indians living in the area in the mid-19th century. His book, published in 1853, is Traditions of De-Coo-Dah and Antiquarian Researches: Comprising Extensive Explorations, Surveys, Excavations of the Wonderful and Mysterious Earthen Remains of the Mound-Builders in America. Pigeon was convinced there had once been a much larger and more advanced civilization in America, one whose knowledge and technology rivaled that of ancient Egypt or Greece. He described De-Coo-Dah, whom he interviewed, as the last prophet of the Elk Nation, but the old prophet may have been knowledgeable in legend and lore more than historical fact. Pigeon theorized a great war in which the more advanced civilizations were wiped out and replaced by the Indians he found. $300.

Where can you learn more about pre-19th century medical practice in New Jersey? Believe it or not, there is such a book: History of Medicine in New Jersey And of its Medical Men, From the Settlement of the Province to A.D. 1800. George Wickes provides historical information about disease and the medical practice in the state in part one, and then follows that up with a section containing biographical sketches of New Jersey physicians. Item 40. $250.