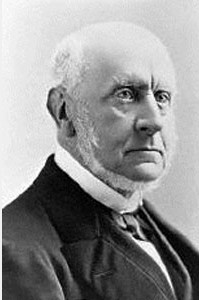 John Adams' first son went on to be president, just as his father. What ever happened to John Quincy Adams' first son? Nothing so good. George Washington Adams evidently labored under the burden of his family and given names. His father had high expectations for him, which caused enormous pressure on the sensitive young man, more interested in literature and poetry than politics. George did get elected to the Massachusetts legislature in 1825, but continued pressure from his father may have been too much. On his way back to Boston after a visit with the recently defeated former President in Washington in 1829, he became delusional. Adams either slipped or jumped off the ship he was riding into Long Island Sound in the middle of the night and drowned. He was just 28 years old. Item 166 is a rare speech of his, one of those Fourth of July orations (actually, this was a Fifth of July oration). It is An Oration Delivered at Quincy, on the Fifth of July, 1824. In it, he recounts American history in a most positive manner, going all the way back to Columbus. He saves his highest praise for the Declaration of Independence and the patriots who fought the revolution. $25.

Quincy Adams' second son, John Adams II, did not fare much better with his illustrious name. He, too, failed to live up to his father's expectations, and died at age 31 of alcoholism. However, his third and last son, Charles Francis Adams, did manage a successful career, and lived to be 79. He served in both houses of the Massachusetts state legislature, was the vice-presidential nominee of the Free Soil Party in 1848 under former President Martin Van Buren, served as a congressman in the U.S. House of Representatives, and, in his most important role, as President Lincoln's ambassador to Britain. There he played a major role for the Union, using his diplomatic skill to keep the British from aiding the Confederacy, a very real threat at the time. Item 165 is An Oration, Delivered Before the Municipal Authorities of the City of Fall River, July 4, 1860. As might be expected at the time, Adams strongly attacks slavery and the concept that property rights are more important than human rights. $50.

Item 174 is a Fourth of July speech from a young congressman who would become one America's greatest orators and political figures of his era, Edward Everett. This is An Oration Delivered at Cambridge on the Fiftieth Anniversary of the Declaration of Independence... Everett would serve in numerous important offices, Congressman, Senator, Governor of Massachusetts, Ambassador to Britain, and Secretary of State, with a stint in there as President of Harvard. It was Everett who was selected to give the primary address at the dedication of the cemetery at Gettysburg, an almost two hour speech that has been overshadowed by President Lincoln's two-minute Gettysburg Address. In the first year of his long public career, July 4, 1826, the newly elected Congressman gave this speech. Everett's patriotic speech included the line, "With our example of popular government before their eyes, the nations of the earth will not eventually be satisfied with any other." This July 4th was a momentous passing of the torch day in American history, for not only was it the nation's 50th birthday, it was the day the Declaration's author, Thomas Jefferson, and Revolutionary leader, John Adams, died. $20.