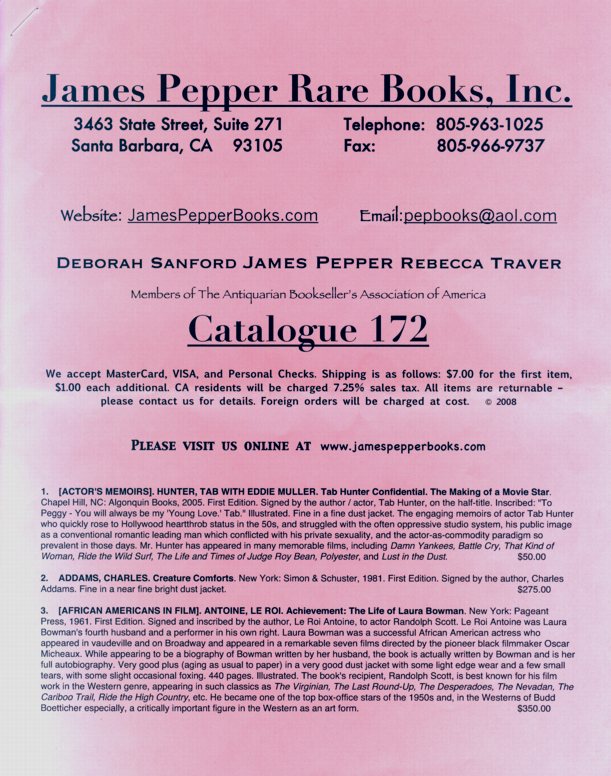 James Pepper Rare Books has issued their Catalogue 172. It is their latest collection of items mostly either associated with film or theater, or first editions of literary works. Many of these items are signed, and a few include comments or inscriptions. Particularly interesting are a couple of works by well-known writers that never were published. Here are a few selections from this most recent catalogue.

Item 143 is a signed first edition of one of the greatest American plays of the 20th century. It is A Streetcar Named Desire, by Tennessee Williams, a not-so-happy tale of a Southern family published in 1947. Pepper comments that this book is "rarely encountered signed." The play, starring Marlon Brando, opened on Broadway later that year, and won a Pulitzer Prize in 1948. Brando would reprise his role in the movie released in 1951. Priced at $25,000.

Item 46 is an unfinished 12,000-word screenplay created by William Faulkner in 1933. At the time, Faulkner was struggling to make a living off of his novels, and figured he could better support his family with some Hollywood work. The screenplay is entitled Louisiana Lou - Bride of the Bayou. Faulkner was writing for director Tod Browning of MGM. We are not certain what happened to Louisiana Lou, but MGM released Lazy River, set in New Orleans, the following year, and some sources say Faukner provided an uncredited screenplay for this film. Faulkner also recounted traveling to New Orleans at the time to work on a film for MGM. We suspect Louisiana Lou and Lazy River are very similar. This signed typescript is part of an archive that also contains a letter from Faulkner to Browning concerning the project and a couple of telegrams from MGM to Faulkner. Priced at $45,000.

Here is another manuscript that never made it to the printer. It was meant to be a revised edition of Groucho Marx's Many Happy Returns! An Unofficial Guide to Your Income Tax Problems. Groucho's book was published in 1942, but in the 1950s, he wished to provide an updated version. Marx wrote several new chapters for the book, and made revisions to others. Among the new chapters were, "The Author Is Investigated," "Warning to Rich Cats and Dogs," "The New Television-Deep Freeze Tax," "The Marx Tax Plan," and "How To Keep a Diary." Pepper notes the 43-page manuscript "has some very hilarious Groucho humor, all of which has never been seen before." Included is an envelope from Simon and Schuster, who published the first edition, postmarked April 2, 1956. Perhaps they weren’t satisfied, but while Groucho and the Marx Brothers' film career had fairly well wound down by then, Groucho was riding high on TV with his "You Bet Your Life" quiz show. Item 88. $15,000.

Item 87 is Room Service. A Play by John Murray and Allen Boretz. This is an advance review copy of the 1937 play which opened that year on Broadway. A year later, it was made into a film, starring Groucho and his brothers and a young actress named Lucille Ball. $650.

Here is an autograph you should look at very closely to decide what you see. Item 109 is a signed letter from psychiatrist Hermann Rorschach, of Rorschach test fame, to a fellow in the trade, Eugen Bleuler. It contains his diagnosis of a patient. This was one of the last writings by Dr. Rorschach. He died just eleven days later at age 37 of appendicitis. $7,500.