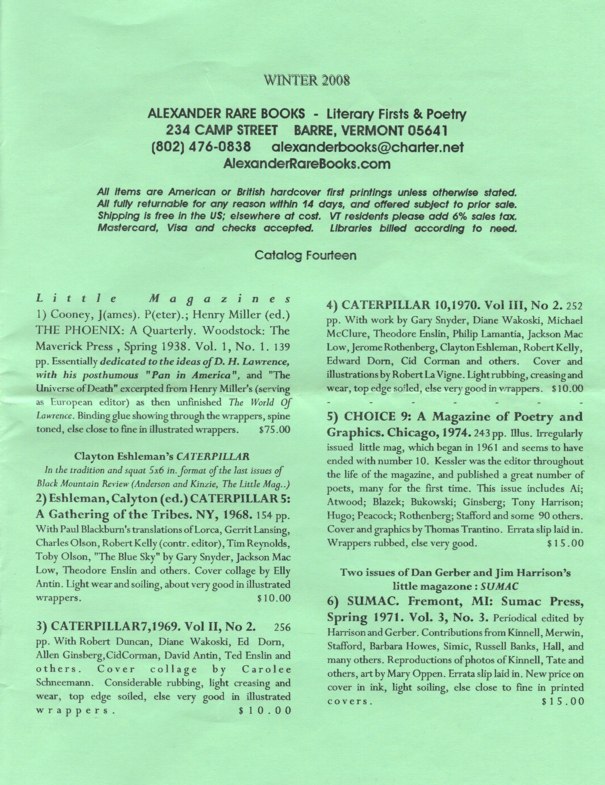 Alexander Rare Books has issued their Catalog Fourteen of Literary Firsts and Poetry. While the heading Winter 2008 indicates we may have received this a bit late, winter does last longer in Vermont. Offered are 150 items, and this time, the great majority are from the field of poetry. Even more specifically, the works are primarily modern poetry. However, there are a few exceptions. Here are a few of the pieces offered.

Item 38 is a review copy of the first book publication of two major poets of the twentieth century: Randall Jarrell and John Berryman. Published by New Directions in 1940, it is entitled Five Young American Poets, the others being George Marion O’Donnell, Mary Barnard, and W.R. Moses. Jarrell developed his reputation first more as a critic than poet in the 1940s, using his biting wit. Although he had been writing poetry since the 1930s, it was not until the '60s that he began writing work that earned serious critical acclaim. Unfortunately, he had personal issues that led him to attempt suicide, and in 1965, he was struck and killed by a car, officially ruled an accident but no one can be certain. Berryman similarly achieved his peak in the 1960s, winning a Pulitzer Prize in 1964. However, he too suffered from depression, and took his life in 1972, leaping from a bridge. Sometimes despair breeds great art. Priced at $500.

Item 39 is one of 26 lettered copies ("Q") of Berryman's His Thought Made Pockets & The Plane Buckt. This 1958 printing was the first publication or first book printing of ten of the eleven poems within. This copy is signed by Berryman. $2,400.

Not to tarry too long on the subject of poets and personal despair, but item 94 is Suburban Monastery Death Poem by D.A. Levy (or d.a. levy). This is a mimeographed second edition (as was the first) published in 1976, eight years after the first. Levy, who tended to avoid capital letters, would mimeograph his sometimes rambling, counterculture poetry in his hometown of Cleveland. Levy, or levy, had his personal issues too, and in 1968, at the age of 26, he shot himself. $35.

After all of these depressing poetic lives, who better to turn to than Ogden Nash? If Nash was not the traditionally serious poet, he was surely one of the funniest, and his popularity spread well beyond the typical audience for poetry. Item 135 is the 1964 Selected Poems of Stevie Smith, the British writer and poet who had her share of depressing personal issues. All of these poets needed to read more Nash. However, she could also be whimsical, like Nash. Anyway, laid into Smith’s book is a promotional card, Mr. Ogden Nash to Miss Stevie Smith: A Bouquet on her American Publication of Her Selected Poems. It contains the 12-line poem Stevie Smith, which Alexander believes is the first, and possibly only printing of this Nash poem. $75.

Here is something very different: The Works of Lord Byron. This is a five-volume set of the early 19th century baron’s poetry, including his best-known work, the epic poem Childe Harold's Pilgrimage. Along with his writing, Byron was a member of the House of Lords, and seemed constantly involved in various romantic affairs and scandals. This led him to leave England in 1816, never to return. This collection was published in 1823, the year before he died. Item 45. $650.

Alexander Rare Books may reached at 802-476-0838 or alexanderbooks@charter.net Their website is found at www.AlexanderRareBooks.com.