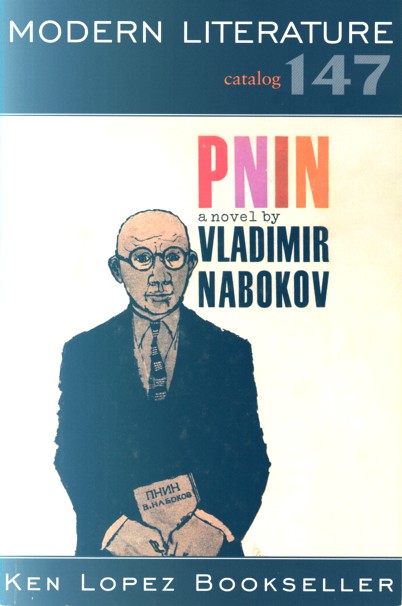 Catalog 147 from Ken Lopez Bookseller offers 260 items in the field of Modern Literature. Included are numerous first editions, pre-publication proofs, signed copies, letters from authors, and even one or two later editions of pre-modern writers (such as Mark Twain). Most material, however, is second half of the 20th century or later, and suitable for collecting. Here are some samples.

Item 16 is the Grove Press first English language edition of Samuel Beckett's Waiting for Godot, published in 1954. Lopez notes that this work is, "Considered by many the single most important play of the 20th century." Certainly it was a forerunner in the field of literature that no one understands, making it quite influential in the years ahead. Meanwhile, we still await Godot, who has a thing or two to learn about punctuality. Priced at $3,750.

Ernest Hemingway was never so vague as to what he meant to say. Here are a brief few paragraphs written by him About Marlene Dietrich, the actress. Hemingway approved of her. This introduction to the play Marlene Dietrich appeared in a 1968 issue of Playbill magazine. Says Hemingway of his close friend, "...the happiest time I have is when I have written something that I am sure is good and she reads it and likes it...For I think she knows more about love than anyone." Undoubtedly more than Hemingway. This obscure Hemingway article is offered as item 87. $150.

Item 81 is the book that made "Hannibal Lecter" a familiar, if not beloved name. It is Silence of the Lambs, and it took Lecter's character, introduced in a previous book, and made it central to the story. Several more Hannibal books would follow, while Silence of the Lambs would become a very successful film with Anthony Hopkins portraying Hannibal. Author Thomas Harris has inscribed this copy of the 1988 book. $1,250.

Item 164 is a signed copy of the book portrayed on the cover of this catalogue, Pnin, by Vladimir Nabokov. It is signed and dated "21 Jan. 1959 Cornell Univ." It comes with a laid in letter of explanation as to how this 1957 second printing of Nabokov’s short comic novel came to be signed by the author. Nabokov, who was just taking leave from Cornell at the time, was reluctant to sign autographs. The previous summer, he had achieved his major success with the publication of Lolita. In the letter, the purchaser of this book says he bought two copies of Lolita for Nabokov to sign. However, Nabokov declined, saying he had an agreement with the publisher not to sign copies of Lolita. So, the quick-thinking purchaser went back to the bookstore and purchased this copy of Pnin, which Nabokov consented to sign. $3,500.

Item 4 takes us back to the confrontations of the 1960s. Cleveland may not be thought as the center of '60s counterculture, but the local police were none too pleased with the poetry being sold by bookseller Jim Lowell. Lowell used to have poetry readings at his Asphodel Bookshop, and some of the words in some of those poems weren't very nice. They referred to topics sexual, scatological, and pharmaceutical. Lowell was arrested, and while the police were not able to find any drugs with which to charge him with possession, they did find poetry they considered obscene. Many of Lowell"s supporters responded by putting together item 4, an anthology entitled A Tribute to Jim Lowell, published in 1967. Compiled by T.L. Kryss, it included works by Charles Bukowski, Lawrence Ferlinghetti, and many more. Charges were eventually dropped against Lowell, who continued selling books from the Asphodel until his death in 2004. $250.

Ken Lopez Bookseller may be reached at 413-584-4827 or klopez@well.com. Their website is www.lopezbooks.com.