Reference Books on Incunabula and Early Books from Frits Knuf 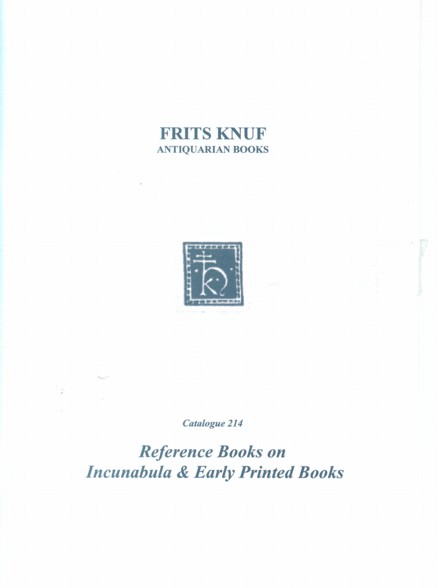 Frits Knuf Antiquarian Books has issued a catalogue of Reference Books on Incunabula and Early Printed Books. Those who collect, sell, or are interested in the earliest of printed books will find much in the way of useful reference here. There are books about early printing, biographies of Gutenberg and the early printers, bibliographies, and numerous bookseller and auction catalogues that featured incunables and other early works. There are also several books on both sides of the who-invented-printing controversy, those favoring the rightful claimant, Johan Gutenberg, and those supporting the Dutch pretender, Laurens Jansz Coster, a popular alternative in the 19th century. While Knuf is located in France, you will find the French, German, English and Dutch languages well represented in these pages. Bookseller and auction house catalogues from the Continent, British Isles, and America are plentiful. Here are a few samples of the 362 items being offered.

Item 239 provides an excellent resource to a large collection of incunabula, A Catalogue of the Fifteenth Century Printed Books in the University Library of Cambridge, published in 1954. This catalogue includes over 4,250 items the library held, and notes where the best published descriptions of each item may be found, correcting or supplementing them where necessary, while providing descriptions for 100 items not adequately described elsewhere. This catalogue also provides provenance and information about the particular copy at the Cambridge Library as well as obscure information concerning the library. Priced at €385 (or approximately $611 in US dollars).

Item 93 is a most interesting auction catalogue from the firm of Gilhofer and Ranschburg of Lucerne, issued in 1932. It is headed, Versteigerung 14/15 Juni 1932: Bibliotheken der Russischen Zaren in Zarskoje-Selo... It was an auction of treasures taken from the Russian Imperial Library at Tsarkoye-Selo (a residence of the Russian Tsars) along with books owned by two notable European collectors. Stalin had ordered these items sold, although he undoubtedly would have done better had he ordered the sale before the stock market crash (that's what you get for not being a good capitalist). Not surprisingly, the Tsars owned some very valuable early printed material as well as illuminated manuscripts. The catalogue includes estimates. €250 (US $397).

Here is an item you may not want to use as a reference, though it probably makes an interesting read: Gutenberg Inventeur De L'Imprimerie. Author Alphonse de Lamartine did get the inventor of printing right, but the rest of his story may not be so accurate. This item is a reprint of what was supposed to be part of an encyclopedic publication, but Knuf, quoting Bigmore and Wyman, notes of the book, "It has no historical value, but treats the matter in a romantic style..." Item 195. €100 ($159).

Coster may not have invented printing, but he still managed to get a musical play written about him: Lourens Jansz Coster of De Utvinding Der Boekdrukkunst, Historisch Drama Met Zang... This 1857 play by J.K. de Regt introduces various members of the Coster household to the public, even the housekeeper, along with Johan Fust and Johan Gutenberg. Fust had worked for Coster and later became associated with Gutenberg, leading to the theory that he had stolen printing equipment invented by Coster and given it to Gutenberg. However, there is scant evidence to support such a theory, which was not even raised until a century after Gutenberg's death. Item 267. €150 ($238).

Item 154 is a reference to early Polish works found in American libraries: Early and Rare Polonica of the 15th-17th Centuries in American Libraries. Author Janina Hoskins had located 1,231 entries in this 1973 bibliographic work, including both works printed in Poland and works printed elsewhere but pertaining to Poland. €75 ($119).