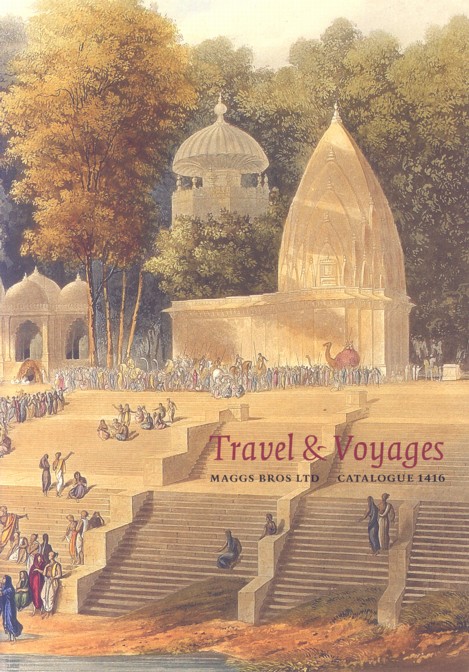 Maggs Bros. Ltd. has issued their 1,416th catalogue: Travel and Voyages. That astonishing number is explained by the fact that Maggs has been around longer than many of the antiquarian books they sell. The firm was founded over a century and a half ago, when Sir John Franklin was newly missing, Richard Burton was just beginning to travel, and explorer David Livingstone's name was not yet associated with that of Stanley. Who better to present a collection of antiquarian travel works than a firm that could have purchased them when new?

Offered in this catalogue are 250 items, including some of the major travel narratives, but many lesser-known items as well. A large number are more visual in nature - images of faraway (from Europe) lands at a time when they were little known to the outside world. Here are a few you will find.

Item 203 is a personal letter to "My dear Sons" from the author of the first textbook on American geography published in the United States, Jedidiah Morse. As Morse explains, he was traveling at the time: "I am writing on board the Frontinac British Steam boat, at anchor in ye mouth of the Niagara river..." Morse goes on to say that he left Buffalo a week earlier, spent a few hours at the Falls, and visited with the Governor of Upper Canada, among other things. In this Aug. 4, 1821 letter, Morse encourages that they publish his atlas quickly as he believes it will sell well in Canada. Presumably, among the “dear sons” to which this letter is addressed is Samuel Morse, who a decade and a half later would develop the first telegraph and the Morse code, radically advancing the speed of human communication. Priced at £650 (or approximate US equivalent of $1,295).

Item 121 is one of the most important sets of voyages for any collector: the complete official set of Captain James Cook's three voyages. These are first editions, from 1773, 1777 and 1784, eight volumes and the atlas. This set comes with an interesting provenance. They were a gift of the Bishop of Salisbury to Princess Charlotte Augusta for her 17th birthday in 1813. Charlotte was the only child of the Prince of Wales, which put her in line to become the British Queen one day. It was not to be. Less than four years later, Charlotte died during childbirth of a stillborn son. The result was that there were no heirs of her generation to the throne, only her father and his brothers, none of whom had legitimate heirs. This led to a quick marriage by a 50-year-old uncle which would produce one child and legitimate heir, the future Queen Victoria. She never would have been queen had Charlotte survived. £42,500 (US $84,758).

Item 181 is Richard Newton's Tit bits in the West Indies. No, that wasn't a Freudian slip. Maggs explains, "this is a good example of the bawdy humour for which he was particularly well known." This is a hand-colored three-panel lithograph from the clever, radical British caricaturist drawn in 1798. Unfortunately, his "subversive" political beliefs and off-color humor limited the distribution of Newton's work, and his career was exceedingly brief. He died later that year at the age of 21. £2,500 (US $4,985).

"What's the matter with Kansas" is the question asked by a recent bestseller. Well, James P. Price had the answer to that question over a century ago. He wrote about it in Seven Years of Prairie Life, published in 1891. Price, his wife and four children immigrated to Kansas from England to take up farming. They spent six and a half years there, only to find it a less than rewarding experience. He writes about the "destructive cyclone...the terrible hailstorm...the bitter northern blasts...the long-continued drought...the flashing of lightening." Ultimately, they decided to return to "old England," where he evidently lived out his life as a farmer and grocer. This copy contains an author inscription from 1900. Item 205. £450 ($897).