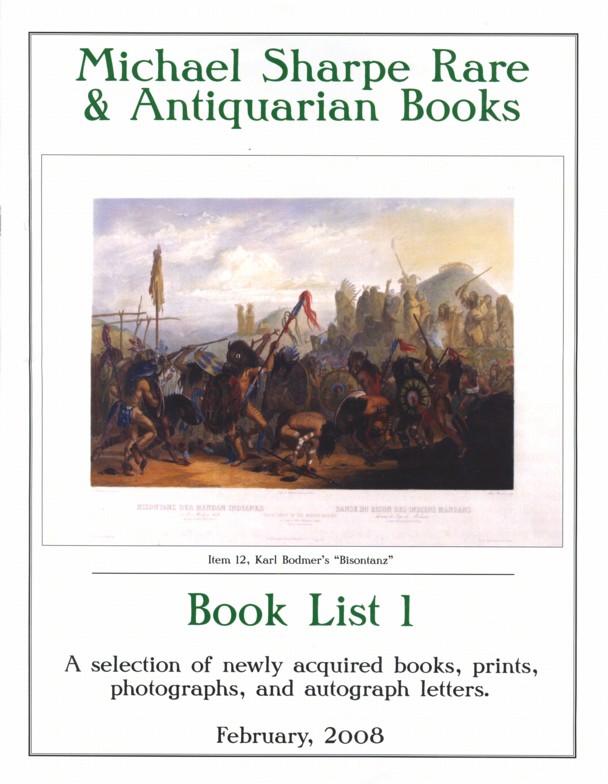 Michael Sharpe Rare and Antiquarian Books has issued their List 1, A selection of newly acquired books, prints, photographs and autograph letters. As the title implies, you can find a bit of just about everything here. This is all collectible material, mostly scarce works, and in top condition. Beyond that, the group is hard to categorize, but we will now provide a few examples.

Here is an appropriate item for a presidential election year: The Photographs of Abraham Lincoln. This collection of photographs was published in 1911 by author Frederick Hill Meserve in a limited edition of 102 signed and numbered copies. It includes 100 chronologically arranged pictures of Lincoln along with others of his family, contemporary generals and politicians, and of his burial. Additionally, there is a facsimile of a letter from Lincoln's son Robert to Meserve. Item 59. $18,500.

Item 43 is another collection of photographs, but this one is an album rather than a book. They were taken during a camping trip by four of the most famous men in America around 1920, President Warren Harding, inventor Thomas Edison, and business magnates Henry Ford and Harvey Firestone. Pictures include Ford cranking up a car (a Ford, naturally), Edison lounging, and Harding and Firestone petting a dog. $1,750.

Here is one more photographic album for those who cranked up the Ford and went on a cross-country trip (not easy considering the roads in 1915): Universal Beauty Trip to the California Expositions and Universal City. This was not a private photo album, but something put together by Universal Moving Pictures, evidently in small numbers. There are 149 photographs mounted in the album, each with a description, while the album is stamped with the recipient's name, in this case Madge Henry of Winner, Iowa. Item 79. $5,000.

Item 3 is a first octavo edition of John James Audubon's less well-known collection of animal drawings, The Quadrupeds of North America. After finally achieving success with the octavo edition of his "Birds of America," Audubon set out to create a similar collection for four-legged creatures. The result is this three-volume set, published in 1849. $12,500.

Mark Twain had a great sense of humor (no real surprise there), as is shown by this signed inscription he wrote on an index card in 1898: "There is but one way to keep well, according to the doctors: Eat what you don't want, drink what you don't like, and do what you'd rather not. Truly Yours, Mark Twain. New Years 98." Someone pass the tofu and soy milk, please. Item 98. $1,250.