The Characters of the American West Return with Old West Books 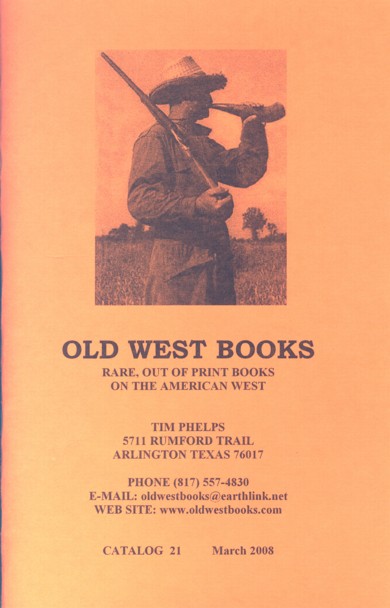 Old West Books has released its Catalog 21 of Rare, Out of Print Books on the American West. You will find all of your favorite western characters in these works. Included are the legendary and obscure, a great many notorious, a few heroic, all interesting. Not to be namedroppers, but lurking in the pages of these books you will find Wyatt Earp, Jesse and Frank James, Wild Bill Hickok, Billy the Kid, Pat Garrett, John Wesley Hardin, Butch Cassidy, Black Jack Ketchum, Bat Masterson, Doc Holliday, Sam Bass, Hanging Judge Isaac Parker, Calamity Jane, Belle Starr, Cattle Kate, George Armstrong Custer, Sitting Bull, Buffalo Bill, Annie Oakley, and so many more. Everything about the Old West is here, from the fanciful to the factual. The land still captures our imagination today. Now, here are a few of the titles offered.

Item 242 is an autobiography from one of the worst of the outlaws, The Life of John Wesley Hardin, From the Original Manuscript, as Written by Himself. Hardin was a violent-tempered man, apparently willing to kill for just about any excuse if he was in the wrong mood. In one instance, he is reported to have killed a man in an adjoining hotel room for snoring too loud. He is said to have killed 20 or 30, possibly more, although one fellow gunslinger he diplomatically avoided was Wild Bill Hickok, at the time a marshal in Abilene, Kansas, the last stop of Texas cattle drives. Hardin had shot someone while working on the drive. Eventually, Hardin was captured in Alabama, and returned to prison in Texas, which he called home for 17 years. He was finally released in 1894, and took up residence in El Paso, only to be shot dead the following year after a quarrel with a local sheriff. However, during that last year, Hardin wrote the manuscript story of his life published in this book. $375.

Speaking of El Paso, item 269 recounts that town's Wild West days in Forty Years at El Paso 1858-1898. Recollections of War, Politics, Adventure, Events, Narratives, Sketches, Etc. Published in 1901, the book tells of the "bloody reign" of the city marshals, and includes an account of Hardin's death. $550.

For old times in Southern California, there's Reminiscences of a Ranger; or Early Times in Southern California, By Major Horace Bell. Bell was familiar with the rougher side of California life for many years. Among his adventures was his participation in William Walker's filibustering raids. Walker managed to briefly seize control of Baja California from Mexico in 1853 before being forced to retreat, and later of Nicaragua in 1856, only to be executed in 1860 during his final raid in Honduras. Item 210. $575.

Like his grandfather, Joseph W. Revere got on his horse and rode. However, he didn't stop at the suburbs of Boston like Paul. He made it all the way to California, with stops along the way for distractions such as the Civil War. His career is recounted in his book Keel and Saddle. A Retrospective of Forty Years of Military and Naval Service, published in 1872. Item 98. $325.