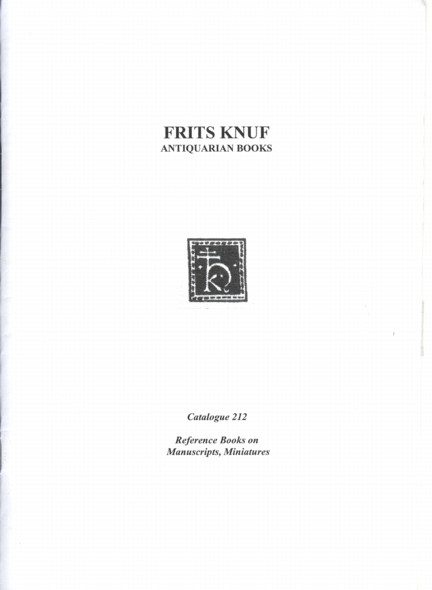 Manuscripts are the focus of Frits Knuf's latest catalogue.

Frits Knuf Antiquarian Books recently issued their Catalogue 212, Reference Books on Manuscripts, Miniatures. The field of manuscript collecting has become very popular, the one-of-a-kind nature appealing to those who appreciate the unique. This catalogue provides those with an interest in these handwritten documents much information about the field, plus numerous catalogues of collections of important manuscripts. In all 373 items are provided, divided mostly among the English, French, Dutch and German languages. While many are primarily informative, there are books and catalogues with facsimiles of illuminated manuscripts that recreate the original art. Here are a few of the items we found.

For those wishing to learn more about illuminated manuscripts, item 13 is The Illuminated Manuscript, by Janet Backhouse, published in 1979. Ms. Backhouse was the Assistant Keeper of Manuscripts at the British Museum, and her work is an authoritative introduction to the field. Priced at €32 (Euros, or approximately $46 in U.S. Currency).

Books are a wonderful source of history, but they only date back five centuries. Manuscripts take us back thousands of years. For a look at manuscripts of ancient history, item 88 is Testaments of Time. The Search for Manuscripts and Records. This 1965 book by Leo Deuel tells the stories of scholar-adventurers who unlocked the secrets of ancient societies through the manuscript records they left behind. €57 (US $83).

Item 224 is an accounting of manuscripts in the library of Chartres as of 1840. Along with a general listing with descriptions, the report notes items that pertain specifically to this French city and its environs. The title is Catalogue des Manuscrits De La Bibliotheque De La Ville De Chartres. €250 ($364).

Where better to look for Texas collectibles than with a French bookseller like Knuf? Without answering that question, item 180 is Manuscript Sources in the Rosenberg Library, published in 1983. The Rosenberg Library, located in Galveston, is the oldest library in continual operation in Texas. It contains an important collection of Texas manuscripts, covering activities both virtuous and criminal…as big as, so to speak, Texas. €57 (US $83).

Not only can references to American manuscripts be found overseas, but so can America-related manuscripts themselves. Item 74 is A Guide to Manuscripts Relating to America in Great Britain and Ireland, by B.R. Crick and Miriam Alman, published in 1961. It provides the location of many manuscripts concerning historical connections between the United States and Britain. €70 (US $102). Item 201 is a Guide to the manuscript materials relating to American history in the German State Archives, by Marion Learned, published in 1912. €200 (US $292). Item 260 is Catalogue des Manuscrits Americains de la Bibliotheque Nationale (American manuscripts in the French National Library), published in Paris in 1925. €22 (US $32).