Items for the California Fairs from Antiquariat Banzhaf 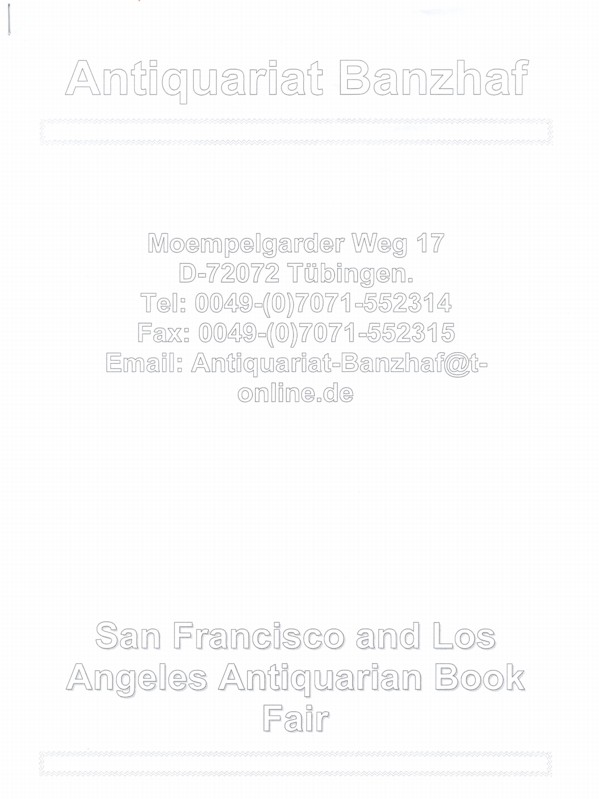 Antiquariat Banzhaf traveled to California for the recent book fairs.

Antiquariat Banzhaf of Tubingen, Germany, recently published a listing of books for their appearance at the San Francisco and Los Angeles Antiquarian Book Fairs. The topics are too varied to pin a label on what the bookseller has to offer, but it is nonfiction with works in such areas as architecture, gardening, science, medicine, furniture and much more, including trade catalogues and ephemeral items. Most works are in the German language, but others, including French and English, are well represented. These are a few of the items Antiquariat Banzhaf was exhibiting.

Essai theorique et experimental sur le galvanisme... is an 1804 first edition of this work on galvanism by Giovanno Aldini. Aldini was an Italian physics professor and nephew of the process' namesake Luigi Galvani. Today we think more of galvanizing, using an electric current to plate metals, but galvanism also refers to applying an electric current to muscles to get them to move. Galvani was the first to apply an electric current to a dead frog's legs, something duplicated by generations of biology students since. Aldini wrote about and conducted experiments based on his uncle's discoveries. Perhaps his most notable exhibition was when the body of George Forster, hanged for murdering his wife and child in 1803, was brought to him. Aldini applied an electric current and evidently made parts of his body move around, even leading some to believe he was bringing Forster back from the dead. Applying electricity to the dead man's face made his jaw quiver, and supposedly when it was applied to his rectum Forster punched his fist in the air as if in anger (as well he might be for such an indignity). This copy of the book was inscribed by Aldini to Russian Tsar Alexander I. Priced at $25,000.

From the "living" dead we move on to human monkeys. The French had some interesting books in the early 19th century. This anonymous circa 1820 work is entitled Les singeries humaines. Petit museum comique et grotesque. Actually, dressing monkeys up like humans was a popular form of entertainment during the 19th century, and this book contains 12 plates so depicting our fellow primates. They are shown in such roles as a fashionable painter, street merchant, sculptor, hunter, and attendees at a concert. It's doubtful they look any more foolish than their human counterparts. This is the first and only edition of this very rare book. $2,000.

Here is an unusual astronomical item: Figurliche Abbildung der grossen Verfinsterung der Sonne... This publication by Clemens Lachmuller was prepared for the 1793 eclipse of the sun. It includes an engraving intended to be cut out of the publication and used to view the eclipse. $1,200.

Father Pierre de Smet was a missionary to the western Indians of North America in the 1830s and 1840s. In 1845, he set out on a long trip to Oregon and the Rocky Mountains, including parts of western Canada. He brought back detailed descriptions of the natives, to whom he was a great friend, their customs and reports on his mission to them. There is also material on natural history and native languages. Offered is the 1848 French edition, Missions de l'Oregon... which Sabin noted contained more information than did the English edition. $1,900.