A List for the Stuttgart Fair from the Antiquariaat Forum 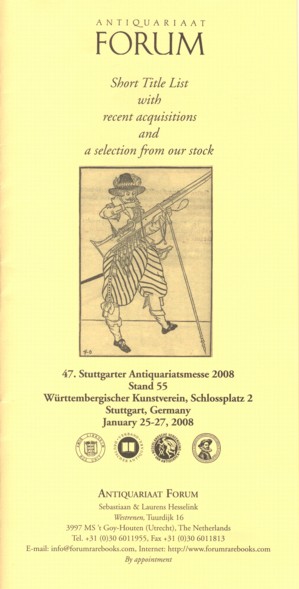 The Antiquariaat Forum is a regular participant in book fairs all over the world. They issue brief catalogues of items of local as well as international interest to be brought to these fairs. Here is such a Short Title List with recent acquisitions and a selection from our stock, this one prepared for the fair in Stuttgart, Germany, this past weekend. It contains 64 antiquarian and rare books published in Europe, most from the distant past. Here are a few.

Item 25 is the account of a spectacular, but ultimately doomed royal marriage of the late 16th century. The young Duke of Julich-Cleves-Berg (part of the Holy Roman Empire) Johann Wilhelm had been the Bishop of Munster, but when his older brother died, he was called back to the secular world to become heir to his father. Johann Wilhelm was a grandson of Holy Roman Emperor Ferdinand I and his father was a very wealthy man. Unfortunately, his father was becoming insane, a condition that would soon afflict Johann Wilhelm as well. Nonetheless, he and Jacoba von Baden were wed in 1585, among much intrigue. Catholics and Protestants were battling for control of the various parts of the empire, and the beautiful Miss von Baden was apparently something of a stalking horse for the Catholics. The plan failed, the Duke became increasingly insane, Miss von Baden provided no heir, and reportedly the Duke's sister decided it was time to seize control of the Duchy. Von Baden was accused of adultery and murdered in her bed, likely at the behest of her husband or one of her in-laws. The Duke later remarried, but still had no heirs, and the branches of the family as well as the different religious groups would fight over the large inheritance when he died in 1609. However, that was all down the road when this account of the spectacular wedding was published in 1587. An enormous amount of money was spent on this celebration with 1,500 invited guests. This account, by Theodor Graminaeus, includes the first views of Dusseldorf ever printed. It was the presentation copy of Maria Magdalena von Hochsteden, one of the bridesmaids. Priced at €37,100 (Euros, or approximately US $54,431).

Here is a book Miss von Baden should have read before she married the crazy Duke. It might have saved her life. Item 46 is Les abus du marriage (the mistakes of marriage) by Crispijn de Passe (the younger). It includes 50 portraits designed to show the evils that can occur in marriage, adultery being high on the list. Unfortunately, it was published in 1641, too late to provide a warning to Miss von Baden. €19,100 (US $28,022).

Item 36 is Histoire generalle des Indes Occidentales et Terres Neuves... This is a rare early French translation of Lopez de Gomara's look at the West Indies and New World, published in 1578. It describes Hernan Cortes' expedition along with the native peoples, flora and fauna of America. €10,070 (US $14,774).

Item 39 is Meteranus Novus, by Emanuel van Meteren. This is one of the most important Dutch histories of the late 16th early 17th centuries. This first German translation was published in 1633-35. It was printed by famous Dutch atlas publisher Willem Blaeu and includes seven maps from his atlas. Van Meteren was an influential individual who not only wrote about history but participated in many of the events he recorded. €63,600 (US $93,311).