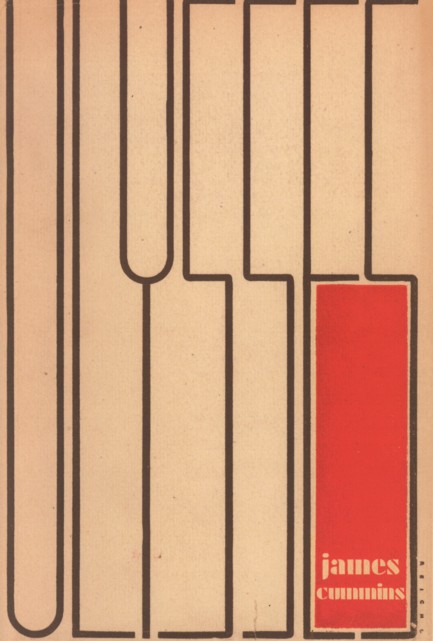 The latest from James Cummins (that's "Ulysses" written on the cover, in case you didn't notice).

The latest catalogue from James Cummins Bookseller is succinctly titled Literature. Perhaps that's a bit too succinct, as while the main focus is literature, there are also numerous works of poetry, and several manuscript items, such as letters from noted authors. You won't find much in the way of obscure writers here. You will recognize most if not all of the names in this catalogue. They are the giants of literature and poetry. Let's take a look inside the pages.

Other than that of Noah Webster, the best-known English-language dictionary was the one created by Samuel Johnson. Published in 1755, it was the first modern, comprehensive dictionary. Johnson signed on to produce the dictionary in 1746, expecting it would take three years to complete. It took nine. When completed, it was a massive work, containing 42,773 words, many with long and detailed definitions. Item 68 is a copy of Johnson's plan, published in 1747, entitled The Plan of a Dictionary of the English Language... This copy bears the bookplate of H. Buxton Forman, scholar, collector, and forger. Priced at $11,000.

Despite his great efforts, Johnson would probably long ago have faded into obscurity were it not for his devoted friend and biographer James Boswell. His The Life of Samuel Johnson is one of the most noted of all English biographies, and it enabled the reputations of both biographer and his subject to endure for centuries. Item 12 is a copy of the first edition, second state of this 1791 biography. $7,500.

Piracy has long been the scourge of great writers. Mark Twain and Rudyard Kipling were victims at the turn of the century. Kipling had written Twain for help in responding to pirate publisher Fenno. Item 22 is a letter and postcard from Twain (signed "S L Clemens") to Kipling's attorney, Augustus Gurlitz, from 1900. Twain acknowledges receipt of the authorized edition of Kipling's work, and professes his support for the cause, though too busy writing himself to dedicate much time to it. The following year, Twain testified in Kipling's copyright infringement lawsuit, and hired Gurlitz to prosecute his own piracy suit against the publisher Butler Brothers. $5,000.

Item 57 is an inscribed second edition (1927) of Robert Frost's North of Boston. Frost has handwritten the text of his six-line poem Atmosphere, and noted it is "For Robert Coffin." Coffin was a fellow poet who won the Pulitzer Prize for poetry in 1936 (Frost won it in 1937). $6,000.

Item 26 is a signed agreement by James Fenimore Cooper with publisher George P. Putnam for the "plates of a new work of fiction" by the "first day of August next." The document is undated, but since Putnam did not go out on his own until the dissolution of the firm Wiley and Putnam in 1847, this is evidently an agreement for Cooper's last novel, The Ways of the Hour. The one-page document is written in Cooper's hand. $5,500.

Wallace Stevens combined two surprisingly unrelated careers, Pulitzer Prize winning writer and insurance company executive for the Hartford. The insurance company position must have been more than sufficient to pay his bills, as item 97 reveals. It is a 1944 letter on Hartford stationary to Allen Tate of the Sewanee Review, regarding the publication of an essay he wrote. Writes Stevens, "...I should like to waive any payment for this article... I know that you wish to pay, but forget it." $5,000.

James Cummins Bookseller may be found online at www.jamescumminsbookseller.com, telephone 212-688-6441.