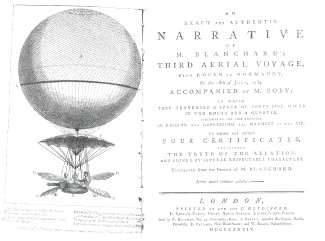 M. Blanchard was one of the very first men to fly.


Americans generally read about slavery in terms of the ending of the slave trade, the fight for abolition, and finally the Civil War. Here is an item that goes back to the times when the slave trade was still young and active, and North America and the Caribbean was rapidly being populated with slaves. The title of this 1710 work is A True State of the Present Difference between the Royal African Company, and the Separate Traders: Shewing the Irregularities and Impositions of the Joint-Stock Managers... The Royal African Company had been granted an English monopoly on the slave trade until 1698, when it was opened to all comers. The pamphlet is highly critical of the Royal African Company, but not on moral or humanitarian grounds. The criticism is leveled against its performance in supplying slaves to this area, particularly the Caribbean, where it notes of Jamaica, "the vast number [of slaves] they might be able to imploy to that end, is beyond the reach of imagination." Item 184. £895 (US $1,813).

Item 196 is An Abstract of the Bill for Manning the Royal Navy with Volunteers. This bill by John Stevenson was published in 1787. It was an attempt to replace the practice of impressment of seamen, which occurred both in Britain and on the high seas, with volunteers, who would be encouraged to join the navy through incentives. Obviously, it was less than successful, as the British continued to impress American seamen for the next few decades, leading to very strained relations and being a major cause of the War of 1812. £225 (US $456).

Here is a book that might be useful today, as the problem has still not been eliminated, though it has been almost two centuries since the book was published in 1812: An Easy and Effectual Method of Destroying Rats, Mice, Polecats, Weasels, Moles, Otters &c. Well, I guess not too many of us are worried about otters any more, but rats and mice are still a problem. Item 21, by Richard Blencowe. £425 (US $861).

Item 26 provides the basic constitution and rules for a new organization, the Boston Institution of the Boston Female Asylum. Organized Sept. 26, 1800. The purpose of the institution was to raise money for orphaned girls age 3-10 to "board them with some capable, discreet woman, who shall teach them to read, write, sew, and do all kinds of domestic business, until old enough to be placed in virtuous families." Published in Boston in 1801. £95 (US $192).