The First From Dragon Books 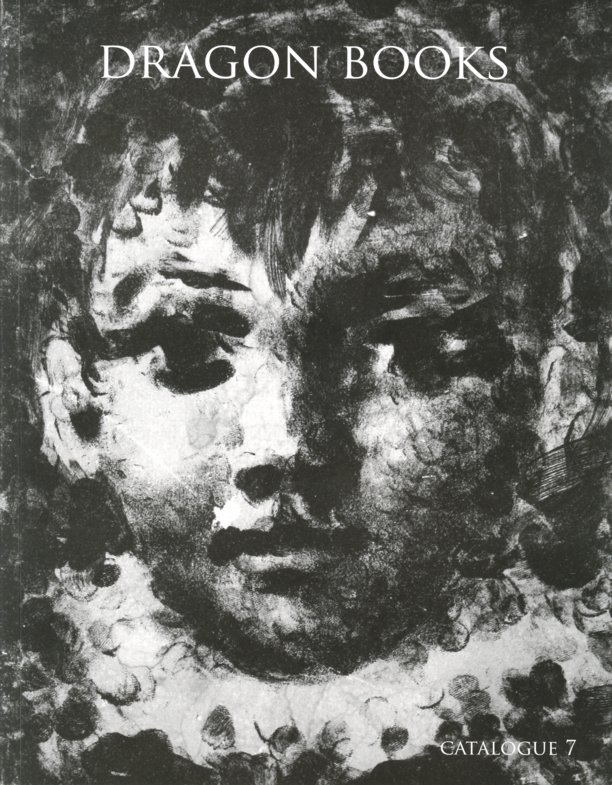 This month we review our first catalogue from Dragon Books of Bel Air (Los Angeles), California. It is their "first complete catalogue," though oddly named Catalogue 7. Dragon was founded by Jay Penske, a lifelong collector who from age 7 determined he one day wanted to run a bookstore. The shop's name is derived from the first book he ever read, Dragon, Dragon, by John Gardner (it's a good thing the first book Mr. Penske read was not Here come the Teletubbies). Their specialty is "15th to 20th century literary works, as well as canons of poetry, philosophy, art, science, and history." This is all top-shelf material, with a gorgeous, well-illustrated catalogue that matches the quality of the books with the quality of their presentation. Along with the fine selection of books herein offered, Dragon Books presents a collection of antiquarian and artistic bookends, including one designed to commemorate Charles Lindbergh's flight across the Atlantic. Here are some of the items included in this first of what we expect will be many outstanding catalogues to be seen from Dragon Books in the years ahead.

"Considered the greatest novel ever written," item 33 is the true first English edition (first issue) of War and Peace by "Count Lyof Tolstoi" (more commonly known as Leo Tolstoy). It was published in London in 1886 by Vizetelly and Company and precedes the American editions of the same year. Not only the greatest, but one of the longest novels ever written, it recounts the difficult times of several Russian families as a result of Napoleon's invasion of Russia in 1812. This edition is quite rare, no copies having been seen at auction in over 50 years. Priced at $37,500.

Item 21 comes with a very rare inscription from a legendary, and more militant leader of the Black Civil Rights movement of the 1960s. The book is The Negro Protest, James Baldwin, Malcolm X and Martin Luther King talk with Kenneth B. Clark. Educator Clark spoke with the trio of civil rights leaders with differing points of view for this 1963 book. The inscription says, "Best, Malcolm X N.J. 1963." At the time, Malcolm X was still a charismatic leader of the Nation of Islam, more commonly known at the time as the "Black Muslims." However, a split was developing between the more politically oriented Malcolm and the religious separatist leader of the Nation, Elijah Muhammad. When Malcolm made an undiplomatic remark about the assassination of President Kennedy ("chickens coming home to roost") he was suspended. Malcolm responded by leaving the Nation of Islam and setting out on his own. His attitudes adjusted in that last year of his life, his views on whites (at least some) becoming less harsh, though his movement was not so peaceful and all-encompassing as that of King. Malcolm X was assassinated in 1965 by followers of the Nation of Islam, and the evolving nature of his views at the time have led him to be a model for those with both militant and conciliatory beliefs. $12,000.

Item 38 is a first edition account of a very important voyage by American standards. The work, published in 1845, is Narrative of the United States Exploring Expedition, by Charles Wilkes. Wilkes led an American expedition noted most for its discoveries in Antarctica. While no one has ever compared Wilkes' voyage with those of, say, Magellan or Cook, it was very important to the psyche of the young American nation, for it showed that the United States was now capable of explorations comparable to those of European nations. $13,500.