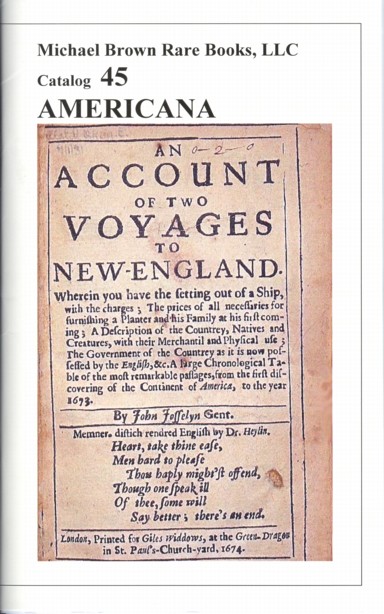 Catalog 45 of Americana from Michael Brown

From Michael Brown Rare Books of Philadelphia comes their Catalog 45 of Americana. This latest collection offers 171 items, ranging from the 17th to the 20th century, though concentrated in the 18th and 19th. It is filled with travels into the unknown west, battles against the French and then the British, especially during the Revolution, the internecine warfare of the Civil War, attempts to both conquer and convert the Indians, political disputes, legal arguments, medical cures, and numerous early 19th century Mexican pamphlets. Many of these works range from scarce to downright rare. If early America is your bailiwick, Michael Brown has something for you. Here is what we mean.

The election of 1800 was one of many unpleasant ballots. The split between the Federalists, on the way out, and Jefferson's Democratic Republicans, was wide and angry. Personal attacks were hardly uncommon. This 1800 broadside, Thoughts, on the subject of the ensuing Election... was addressed to New York Federalists. The author, calling for the defeat of President Adams, wryly notes "...surely it is time for Mr. Adams to retire, and do this when he may, he will carry with him an abundant share, both of public honours and public money..." Item 133. Priced at $3,500.

Item 12 recounts a journey into the wilds of western New York during the summer of 1743. Author and respected botanist John Bartram, accompanied by mapmaker Lewis Evans and Indian Agent Conrad Weiser, made the journey. While Bartram was primarily interested in plant life, he recorded much about the Iroquois who lived in the area, including a depiction of one of their famous "Long Houses." The book is Observations on the Inhabitants, Climate, Soil, Rivers, Productions, Animals, and other matters worthy of Notice. This 1751 work also includes a letter from a Swedish traveler, Peter Kalm, to Bartram, describing the "Cataracts at Niagra." $9,500.

Item 124 is a most interesting pamphlet by Thomas Paine, whose pen gave voice to the American Revolution. After that battle was won, Paine moved on to other revolutions, and at the time of this speech (1792 -- published in 1793) found himself addressing the French legislature. The title is Reasons for Wishing to Preserve the Life of Louis Capet, Louis Capet being French King Louis XVI. Paine was virulently anti-monarchist, so there is no small irony in finding him desperately trying to save the life of the French King. However, by the Fall of 1792, the French Revolution had already begun to swing out of control, and the Reign of Terror was not far behind. Paine points out that he had opposed an earlier compromise that had brought the King back, albeit with reduced power, calling that an "unaccountable folly." Nonetheless, Paine retained the humanitarian instincts the French radicals lost. He pulls out a clever argument to save the monarch -- he notes that the King had supplied America with critical assistance during its democratic revolution, and for that, he deserves to be spared. He recommends Louis be sent into exile in America, where he will be able to see for himself that democracy is a superior form of government. Paine also points out that, as bad as the King was, he was no worse than other kings, and even monarchs are subject to "human frailty." It was to no avail. Louis was put to death early in 1793, and by the end of the year, Paine too was imprisoned, barely escaping the guillotine before the radical government fell. $500.