The Antiquariaat Forum in Boston 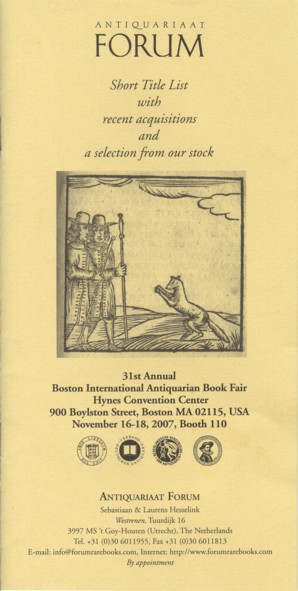 The Antiquariaat Forum displays in Boston.

The Antiquariaat Forum recently printed a Short Title List for its participation at the Boston International Antiquarian Book Fair. The Dutch bookseller includes a few more items in English than we usually see, along with Dutch and other tracts. Many are very old, dating as far back as the sixteenth century, with a few of more recent vintage mixed in. As usual, these are primarily works that are quite rare and desirable. Here are a few.

Item 30 is a first edition of the rare work advocating freedom of the seas, Mare librum (Free seas), by Hugo Grotius, published in 1609. Grotius was a Dutch jurist who promulgated the view that the seas should be open to commerce for all nations. At the time, this was not a widely accepted viewpoint, many nations believing their territorial waters extended indefinitely. In time, the standard for territorial waters would be set at a cannon fire's limit, three miles. Priced at $134,700.

One who would sail those free seas was Captain James Cook. His three voyages from England to the South (and North) Pacific were among the most important journeys of discovery, learning much about Australia, Hawaii, the Pacific Northwest of America, and the Antarctic. A set of his three voyages, including the atlas, is not easy to come by and is quite expensive. Item 13 is a set of Cook's three voyages in the first Dutch edition, Reize rondom de Waereld... available for a much more modest $12,500. Rather than having a separate atlas, the maps and plates are scattered throughout the three volumes, placed in the appropriate locations.

Also offered are a couple of works relating specifically to Cook's third voyage. Item 19 is William Ellis' An authentic narrative of a voyage performed by Captain Cook and Captain Clerke, published in 1783 (second edition). This final voyage attempted to find a northwest passage around the North American continent. At this, it was unsuccessful, and Cook lost his life in Hawaii on the way back. The writer was Assistant Surgeon for the voyage. $13,200. Item 66 is Reise um de Welt, mit Capitain Cook, by Heinrich Zimmermann. Zimmermann was an ordinary sailor who, against the rules, kept a journal of the voyage and jumped the gun by publishing it before the official account was released (also against the rules). Offered is a first edition, in Zimmermann's native German. $76,300.

Here is a book for collectors of... ??? The work is De flatibus humanus corpus molestantibus...by Johannes Fienus. Fienus was a 16th century Antwerp physician, and the subject of this book is flatulence. It includes numerous cures for the discomforts caused by this condition, and along with more expected remedies such as herbal concoctions is one where a connection is made between the intake of a bellows and where the sun doesn't shine. The cure here involves the principle that nature abhors a vacuum. Just don't stand in front of the bellows. This work may well be useful today, considering that even after the four-plus centuries since it was published in 1582, this malady is still wanting for a cure. Item 23. $4,100.

As long as we are discussing unpleasant medical issues, how about Essai sur les Maladies des Dents...? This is a first edition of this book on dentistry, such as it was in 1743. Author Robert Bunon was one of the most knowledgeable physicians in the field, and his emphasis is on proper dental care for children. Still, there was much yet to be learned and some of his theories are dated. Item 11. $9,025.